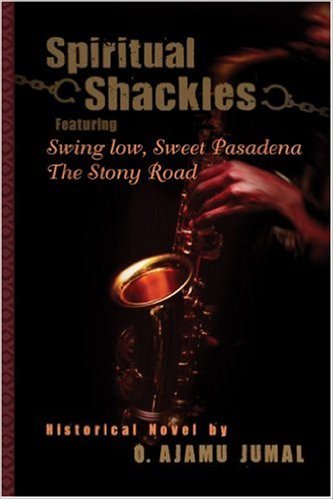 Read a Description of Spiritual Shackles

Who burned the churches?

This is a question that kicks off the historically mystic journey that is Spiritual Shackles.  Set primarily in Pasadena, California in the 1950s, this novel sets out to answer this question. However, Spiritual Shackles takes you on a sensory-pleasing journey, from California to Brazil, before one ends up with the answer.

Spiritual Shackles is not so much a novel, but rather a series of vignettes that are artfully sewn together to create a rich backdrop against which the church-burning question resides.  Clyde ’CJ’ Johnson, Jr. is a recovering alcoholic reporter who is determined to get back to the top of his reporting game and scoop the story on who is burning local black churches in Pasadena. One of his sources, Tulsa Jim, gives CJ clues that take him on a path of self-discovery that leads him to Roxanne, his future wife. CJ, Roxanne and their eventual offspring are all drawn together by the presence and love of a local conjure woman known as Mama Vye. Mama Vye is the subject of much speculation and fear within the black Pasadena community that CJ dubbed ’Ebonyville’; not only does she live in a house and on land that her family has outright owned for decades, no small feat during a time when blacks barely had the right to vote, but Mama Vye also has four foster children with dubious origins.  CJ and Roxanne's children, along with Mama Vye's foster children, will eventually create a powerful political and spiritual force that will change the very fabric of the lives of black Pasadena citizens.

As CJ follows clues that will eventually lead him to the identity of the church arsonist he, as well as the reader, engages in a journey that forces him to study his family history more closely. Each clue spins off into the back story of another character, and it is only within yet another clue that it is obvious how the characters are interconnected both with each other and with the overall quest to discover who is burning black Pasadena churches. While showing these bonds the author displays them against a rich Afrocentric historical background that is not only entertaining, but informative. The presentation of such history and facts is enough to give the reader incentive to do some research on his or her own.

One flaw with this novel is that there is sometimes an overemphasis on metaphor and imagery. It was due to such literary license that the answer to the question of who burned the churches, was not as easy to figure out.  The author tends to be a bit heavy-handed at times on the mystical/spiritual subplot of the story, which causes the characters to occasionally engage in trite, long-winded internal monologue.  Also, for those who prefer their novels to be a bit more linear and straightforward, the circular pattern of the novel may be a deterrent.  However, Spiritual Shackles contains enough drama, history, folklore, suspense, and romance to satisfy readers of all genres.  don't let the size of the book or the price deter you from picking up one of the most intriguing books I have read to date. I thoroughly enjoyed it and look forward to Mr. Jumal's upcoming works.

Read To Be Determined’s description of Spiritual Shackles.