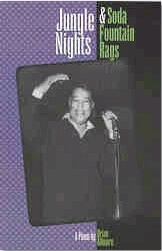 Read a Description of Jungle Nights and Soda Fountain Rags

Book Reviewed by Kalamu ya Salaam

Brian Gilmore is a cut above. His 30-part poem on Duke Ellington is deep and deft. Each section can stand alone, but taken as a whole the piece is a magnificent, swinging suite not unlike some of Ellington's major compositions.

Gilmore has done his homework and is thorough in using specific details of the lives and lifestyles of Duke and his band members. If you know the sound and history of Duke music, your appreciation for Gilmore's work will be increased three or four-fold.

Rather than solely evoke the music itself, Gilmore gives us nuanced and knowledgeable portraits of these musicians as human beings with desires, contradictions and marvelous musical talents. The book opens with an elegant portrait of young Ellington:

the boy who painted
signs was blessed
from birth,
played baseball
piano
and hung out all over the city
where he was born,
ward place Washington, D.C.
rent party regular
down with the
blues
buddy Bolden
Bunk Johnson
intrigued with this
newfangled
New Orleans
Negro music
called

The book's ending is equally poignant, for now the spotlight is turned on Duke's son Mercer, who carried the band on after Duke was gone. Hear both the familial tenderness and the inevitable comparative tension of father and son who are also musicians and successive leaders of the same band:

and the poem continues with this magnificent image of macho and sentimentality mixed into an inseparable duende:

like an extra in
a film
the son was
there

and the man what he had
to become

stepped
to the side
like a bullfighter
with a red cape

took the father's paint
into his hands

The language of this long poem is simple, but the sentiments are bittersweet river deep, ocean wide, as right as rain and terrible as a thunderstorm. Gilmore is grappling with issues at a larger level than the majority of contemporary poetry attempts. Most of us go for the personal moments, the introspection of the self, and here comes Gilmore telling us about Ellington and Hodges, Paul Gonsalves and Juan Tizol, Bubber Miley and Billy Strayhorn; telling us about the meaning of music that unerringly was the essence of us.

Some would look for more alliteration and other poetic devices to dress up the words, but by the use of understatement and simplicity Gilmore more accurately conveys the grand complexity of Duke's mighty music. What Gilmore does is show the immensity of his subject by employing tiny, precise gestures that attract our attention more thoroughly than if he were waving huge colorful flags. I think Gilmore's technique is cinematic rather than dramatic, meaning like a good movie actor using just soft voice and facial gesture he reveals a world that on stage might require grand movements and tumultuous talk. This minimalist approach was a successful gambit that could have easily backfired had not Gilmore packed the spare stanzas with so much history, with so much meaning, and so much reflection of the rigorous beauty of Duke's music.

On the deficit side of the street, I do not like either the layout or the typeface that was chosen; neither has the elegance of the music nor the subtlety of the poetry. The typeface is hard to read, and it is very, very difficult to distinguish commas from periods, which may not seem like a major problem, but in poetry as tightly crafted as this is, every word, every punctuation, every line break contributes both to the overall meaning as well as to the beauty of the poem's content and topography. Layout wise, the book would have been better served by isolating the sections instead of running them one after the other without breaks. The cover in purple, green and white with a black & white photo of Duke is gaudy rather than grand. I doubt Duke would have found this combination of typeface, layout and cover attractive.

But regardless of the gaucheness of the package, the redemption is in the message. Let me close this review with one of my favorite sections, part 6.

a young girl
is somewhere waiting on
the boy she loves; she
has seen him everyday for the last
five years but today he will not come.

an old man
is down by a river
standing at the spot
where he saw his only son drown.

i travel to all these places,
long to capture that
which seems to be our shadow
swells with absurdity
recalls jobs we can't have,
hotels we can't enter
restaurants which
show us doors instead of menus.

we are that drama.
we are this unusual arrangement
that speaks
for the millions
that is why
this song is full of
our dreams.

and somewhere
we were living
this mood’

Gilmore, I love this work, madly.