Book Review: Gook: John McCain’s Racism and Why It Matters 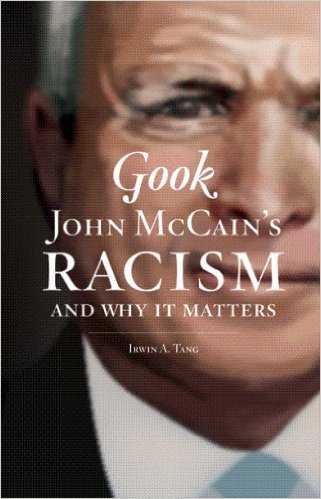 by Irwin A Tang

Read a Description of Gook: John McCain’s Racism and Why It Matters

’’I hate the gooks,’ said John McCain in the year 2000. ’I will hate them as long as I live.’ It reveals something when a senator calls people ’gooks' and volunteers it for mass media broadcast’ The fact that Mr. McCain carries such everlasting hate within him ’ that says something too.

My mother does not want me to publish this book. I know exactly what she meant even though she did not say it. My mother simply wants no trouble, no heartache, for me or my family.
I grew up in East Texas and my parents still live there’ the Ku Klux Klan is still very active there. Black people still get ’nigger’ yelled at them. I got spit on for being Asian’ growing up. I was called ’gook’ every so often. Other times it was ’Jap’ or ’Chink’ or some other racial epithet. [And] the name-calling was never as bad as the violence.

Have you ever been an object before? It is difficult to describe my own personal experience as a ’gook’ in America’ What I am doing here is not an attack. It is a public service for my nation. If you've ever been called a ’gook,’ you know this in your heart.’
’Excerpted from the Introduction

While on the presidential campaign trail in February of 2000, John McCain was confronted by the press about his use of an ethnic slur against Asians. Instead of apologizing, the notoriously short-tempered Senator from Arizona arrogantly went on the offensive, asserting that he would always hate ’gooks.’

It is now eight years later, and the country is facing the possibility that this inveterate racist might actually win the White House on Election Day. For this reason, Irwin A. Tang decided to publish Gook: John McCain's Racism and Why It Matters. Tang, also the author of How I Became a Black Man, is an outspoken anomaly among Asian-Americans, a group dubbed the ’model minority’ because of their deference in the face of discrimination based on their skin color.

This timely tome makes a powerfully persuasive case against celebrated POW and presumed patriot McCain in several ways. First, Tang talks about the psychic and sometimes physical wounds he and other Asian-Americans have silently endured at the hands of bigots on account of prejudice. Then, he shows how McCain has courted the support of numerous white supremacist organizations over the course of his checkered political career. Most importantly, he then shows why this warmonger cannot be trusted to set the tone for tolerance either domestically or in terms of international affairs, given his history of dehumanizing ethnic and religious groups he doesn't care for.

The eye-opening book's basic question is this: Have we as a country really become so desensitized to hate speech that we're willing to elect someone President who so openly stereotypes and acknowledges his dislike of a large segment of the society he is supposed to govern? After reading this heartfelt memoir/impassioned polemic, I say Irwin Tang, not John McCain, is the true American patriot. For, at considerable risk to his own personal safety, the author of this shocking expose’ has revealed the Republican presidential nominee as little more than an incendiary race-baiter more reminiscent of a Jim Crow-era segregationist than a straight-talking maverick.

A moving must-read for any voters still undecided about who they’re going to support in November.

Read To Be Determined’s description of Gook: John McCain’s Racism and Why It Matters.