Book Review: 50 Years After Brown: The State of Black Equality in America 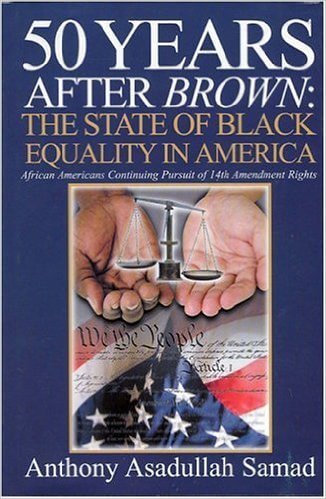 Read a Description of 50 Years After Brown: The State of Black Equality in America

"The state of black equality in America 50 years after Brown reflects the historical recalcitrance of racial resistance in America that started from the very day the first government of the United States sought to exclude free Africans and enslaved Africans... The politics of equality, and who was more equal versus less equal, stands squarely within a mindset of the racial superiority borne out of a slave master-slave relationship that manifested an inhumane disregard for the rights of a people who, from the very outset of the American egalitarian experiment, weren't meant to have any rights...

The state of black equality, and the inequalities that still persist, is a function of a predated mindset still pervasive throughout American society.

The state of racial equality in America, today, is the result of a concentrated effort to maintain a historical racial hierarchy, a failure to address past discrimination, a concerted attempt to ignore the disparities created out of intentional societal exclusion, as well as a failure to repair the social and economic damages borne out of such a protracted exclusion."

How far have we come in terms of realizing Dr. Martin Luther King, Jr.'s dream of a country where a person is judged not by the color of his skin but by the content of his character? Not far enough, according to Anthony Asadullah Samad who sees the country not so much colorblind as blinded by color.

Professor Samad, who teaches political science at East Los Angeles College, is the author of the critically-acclaimed Souls for Sale: The Diary of an Ex-Colored Man. As highly-regarded as that revealing memoir of a politically-committed brother coming of age on the front lines of the Civil Rights struggle, his latest tome offers an even more educational, thought-provoking, and compelling reading experience.

Entitled 50 Years after Brown: The State of Black Equality in America, it makes a most persuasive case that despite the gains made in the wake of the dismantling of Jim Crow system of segregation, African-Americans still have a long way to go in terms of achieving true equality in this society. For it is his contention that deep-seated, culturally-ingrained notions of white supremacy still need to be rooted out, if the United States is ever to live up to the self-evident, God-ordained truth that "All men are created equal," as so matter-of-factly stated in the Declaration of Independence.

The book is brilliantly laid out, chronologically, working its way from the Colonial Period to the present. It begins with "The Three-Fifths Compromise" whereby the Founding Fathers, in the course of establishing a new nation, agreed, Constitutionally, to deem blacks as lesser beings. The author argues that so much subsequent legislation and litigation would again and again rely on that demeaning notion to rationalize relegating African-Americans to the lowest rung of the social order.

For instance, Chief Justice Taney, in the landmark Dred Scott decision (1857) declared, "Negroes, either free or slave, as men of the race, are not citizens of the United States by the Constitution." Later, the Supreme Court's equally-repressive Plessy v. Ferguson ruling rested on a similar cultural reasoning that race was "a fact of life." This allowed for a contrived dual citizenship which rewarded whiteness while penalizing blackness in permitting separate but supposedly equal facilities, wink-wink.

And although the Brown v. Board of Education case (1954) ostensibly overruled Plessy, Samad says that a focus on the dismantling of Jim Crow without devoting attention to remedies for the underlying attitudes, enabled racists to reinvent a more subtly oppressive social order which has not only still left blacks at the bottom of the barrel, but which has increasingly blamed the victims of slavery for their ongoing plight. Well-reasoned, painstakingly-researched, and extensively-annotated, 50 Years after Brown eloquently retraces the never-ending quest of African-Americans to partake of all this country has to offer as full-fledged citizens.

As much an affirmation of the black man's humanity as it is an appeal to eradicate the last vestiges of a color-coded caste system instituted during the slave days. Plus, it serves as a clarion call for all to assert their self-respect, since as Carter Woodson is quoted in Chapter 6, ’If you make a man feel that he is inferior, you do not have to compel him to seek inferior status, for he will seek it for himself.’

Too bad I don't put out an annual 10 Best List for books, the way I do for films. Otherwise, this insightful opus would be a serious contender for the top spot.

Read Kabili Press’s description of 50 Years After Brown: The State of Black Equality in America.