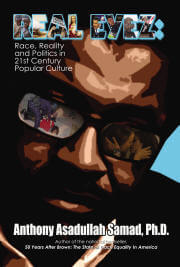 “America’s oldest dilemmas are rooted in race realities that it, as a nation and as a society, refuses to confront. Is race the dilemma of the 21st Century, in the same way it was for the 19th and 20th Centuries?

Will the complications of race, and its output, racism, allow the country to move forward, or will it hold it back—because society refuses to let go of outdated values and attitudes? These are all questions this book seeks to confront, critique and analyze…

Whether we like it or not, 21st Century reality is here… The ‘real world’ is not going anywhere… It’s time for black America to get real about who it is, what it has become and whether America is ever going to deal with black people in an equitable and humane fashion.

It’s time for all of us to get real.”
—Excerpted from the Introduction (pgs. iii-iv)

Professor Anthony Asadullah Samad has long been a brother with his finger on the pulse, not only as a Professor of Political Science and African-American Studies, but as a nationally-syndicated columnist and author of several best-selling books. In his latest work, Real Eyez: Race, Reality and Politics in 21st Century Popular Culture, Dr. Samad again turns his attention to the plight of blacks in America, but with present-day prerogatives in mind.

For, as he astutely observes, “We are no longer a nation that sees things in just black and white,” since “our world is now black, brown, red, yellow and white.” Consequently, the new millennium has been marked by a host of cultural changes, many of which have been lost on unsuspecting people still playing by the old rules.

Real Eyez is an attempt by the author to shake black America out of the doldrums and have it face up to its moral drift as well as assorted paradigm shifts. For example, he argues that the election of George W. Bush ushered in an era of “Anti-Intellectual Narcissism” during which the country became dumber, greedier and more boastful.

In a chapter entitled “America’s Unbe-weavable Identity Crisis” Samad sheds light on what he calls “the weave phenomenon,” bemoaning weave-wearing sisters’ embrace of a European hair aesthetic which affects their “very psyche of beauty consciousness.” He says that black women, “in their color diversity and breadth of complexion and body types,” already represent some of the most beautiful, natural species on the face of the Earth.

Other topics addressed include the mega-church/microwave religion movement, the resurrection of the Civil Rights Movement, Negrophobia, hypersexuality, President Obama as an anti-hero in an anti-realism age, and the Occupy Movement’s refusal to recast the American Dream. Curiously, this thought-provoking opus’ closing chapters are devoted to a couple of late icons, Michael Jackson and Rodney King, and ends with a prayer for justice for Trayvon Martin.

A sobering and enlightened take on the state of 21st Century African-Americana courtesy by a fearless firebrand who has never been afraid to speak truth to power.