Book Review: Michael Jackson, The King Of Pop: The Big Picture, The Music! The Man! The Legend! The Interviews! An Anthology. 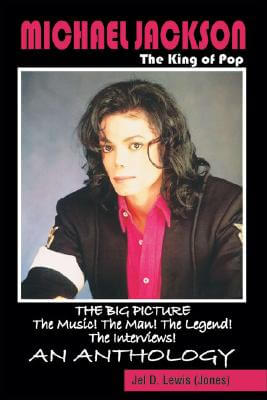 Read a Description of Michael Jackson, The King Of Pop: The Big Picture, The Music! The Man! The Legend! The Interviews! An Anthology.

’I have admired and adored Michael Jackson from the first time I heard his name and listened to his music. I have never been more fascinated by an entertainer before or since’

As a huge Michael Jackson fan and as a writer, I wanted to do something and give back to the entertainer for all the good feelings he has given to me and so many fans across this country and others. My gift to Michael is this positive book about his life and his music career.

The thought to write this book came to me out of the blue when I was reading a [positive] article about him [which] left me with good feelings, compared to the sick feelings I get when I listen to the television and radio and hear all the negative press about him. So, I decided to [do] my small part by putting out some positive information about the Superstar!’
’Excerpted from the Introduction (page xvii)

In the wake of Michael Jackson's untimely passing, I'm sure his legions of devoted fans are looking for a way to keep his spirit alive. They would do well to consider picking up a copy of Michael Jackson: The King of Pop, a comprehensive anthology comprised of interviews, song lyrics, dozens of color and b&w photographs, and more.

The literary equivalent of a bound fanzine, the book offers an uncritical peek at Jackson both from his own, self-serving perspective and that of the admittedly-adoring author. Despite her gushing, syrupy sweet tone, the tome is still fairly fascinating primarily because Michael comes off as a very sympathetic figure who clearly became bizarre because he never had a normal childhood. It's sort of like how a dog or a cat is worthless as a pet if it's weaned from its mother at too young an age.

Consider Jackson's response when asked by a reporter from USA Today in 2001 whether he's ’resentful that stardom stole his childhood. ’Yeah, it's not anger, it's pain,’ he admitted. ’People see me at an amusement park or with other kids having fun, and they don't stop and think, ’He never had that chance when he was little.’ I never had the chance to do the fun things kids do: sleepovers, parties, trick-or-treat. There was no Christmas, no holiday celebrating. So now you try to compensate for some of that loss.’

In another article, Michael takes on the paparazzi, saying ’The tabloid press are bastards, and you've got to have rhinoceros skin to deal with that ignorant mentality’ They simply make it up’ I'm nothing like the way the tabloids have painted me out to be, nothing’ They’re the ones who are crazy.’

He even sounds very convincing when he explains that his trademark crotch-grabbing dancing ’isn't sexual at all.’
A coffee table keepsake which makes a convincing argument that while Michael Jackson might have been the consummate performer onstage, as soon as the music stopped he always turned back into the na've innocent who had never grown up and couldn't hurt a fly.

Read Amber Books’s description of Michael Jackson, The King Of Pop: The Big Picture, The Music! The Man! The Legend! The Interviews! An Anthology..