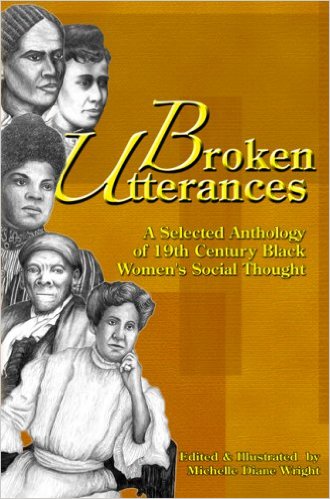 ’This book endeavors to piece together the broken utterances of 20 women into a seamless painting of understanding which is representative of Black women of the 19th Century’ It is an examination of how the unique position of the African-American woman provides her with the ability to dissect the ills of society, and also offers her distinctive insight for positive transformation’

The broken utterances of each of these 20 women serve to make their personal journeys a universal expression of the tripartite and egalitarian nature of gender, race, and class concerns for all Black women in the past and present. They began the erasure of the blue-lined boundaries that society imposed upon them, and boldly opened an exhibition space in which their collective offspring would continue to create.’

For too long, the unique perspective of the African-American female has languished in the shadows of intellectual thought. During the Civil Rights Era, sisters tended to be relegated to support rather than lead roles. Thus the Movement was marked by both machismo and an unchallenged patriarchy, as exhibited by revered icons like Student Non Violent Coordinating Committee (SNCC) Chairman Stokely Carmichael and Black Panther Spokesperson Eldridge Cleaver.

When Carmichael was confronted during a SNCC conference by black women concerned about their roles and what they saw as sexism, he abruptly ended the discussion by stating, ’The only position for women in the movement is prone.’ Cleaver, a convicted rapist, was worse, for he implemented a philosophy termed ’Pussy Power’ whereby the Panthers pimped out their women for the cause.

In her autobiography, ex-Panther Elaine Brown admits to selling her body to wealthy white men to help support the Party financially. And she has come to regret that a woman asserting herself in the organization was ostracized as a pariah.

Given that prevailing attitude of the previous generation, it should come as no surprise that African-American culture might have devolved into the miasma of misogyny reflected in the explosion of thugs and gangstas in evidence today. However, this sorry state of affairs doesn't reflect the fact that there are now and have always been many intelligent African-American females inclined to weigh-in on the issues of the day without compromising their dignity.

I have digressed by way of introduction only in order to emphasize the significance of Broken Utterances: A Selected Anthology of 19th Century Black Women's Social Thought. For this groundbreaking book, edited and illustrated by Michelle Diane Wright, lays the groundwork for an appreciation of a score of visionary sisters who were ready to lead their people over a hundred years ago.

Although a combination of racism, sexism and classism might have meant that most of these brilliant thinkers went unrecognized by mainstream history books, fortunately they left behind speeches, articles and journals which the author has unearthed and culled through to distill into an informative text of considerable significance.

For in discussions of prominent black women of the 19th Century, generally, only Harriet Tubman and Sojourner Truth come to mind. And while those two icons were certainly among the leading activists of the era, they were by no means the only ones speaking out eloquently and forcefully on the culture and politic climate.

There was also, for example, Maria W. Stewart (1803-1879), a contemporary of insurrectionist David Walker, earnestly advocating the abolition of slavery. She informs whites that ’Our souls are fired with the same love of liberty and independence with which your souls are fired,’ adding that she is not out for revenge because, ’too much of your blood flows in our veins, and too much of your color is in our skins, for us not to possess your spirits.’

In another chapter, Sarah Mapps Douglass (1805-1882) complains about the use of the insulting term ’Negro’ in reference to African-Americans. Though born free in Philadelphia, she relates how she came to care about the plight of fellow blacks yet enslaved after someone tried to kidnap her in order to sell her as chattel.

Ann Plato (born 1824) emphasizes education in her essays, saying, ’This appears to be the great source from which nations have become civilized, industrious, respectable and happy.’ Sojourner Truth (1797-1883), observing the privileged position enjoyed by white women in society insists, ’Look at me! Ain't I a woman?’

Sara Parker Remond (1826-1894) focuses on the wholesale rape of black women and the implicit simultaneous psychosis of the white male in an 1859 speech where she observes that, ’there are 800,000 mulattoes' and these are constantly sold by their parents.’ And we learn that the fiercely independent Harriet Tubman (1820-1913) left her Uncle Tom of a husband's black ass behind, even though he threatened to inform massa of her plans to escape.

These and so many other searing narratives combine to make Broken Utterances not merely a fascinating read, but a seminal contribution to the field of black feminist intellectual thinking. As such, all of African-Americana owes a debt of gratitude to Michelle Diane Wright for her admirable, exhaustive, encyclopedic efforts to elevate these brave, sisters, even if belatedly, to their rightful place as very important voices in the black struggle for freedom.