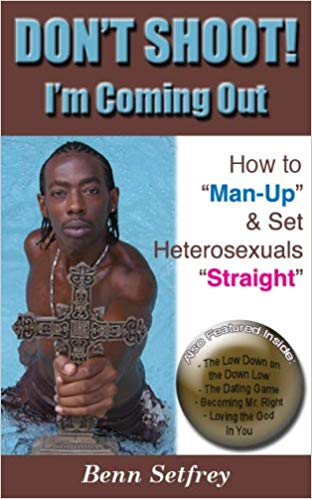 Read a Description of DON’T SHOOT! I’m Coming Out ~ How to "Man-Up" and Set Heterosexuals "Straight"

’This book is dedicated to young men who are battling with their sexual orientation and to those men who embrace their homosexuality. There are no fringe benefits for being a black man on this planet. When you add homosexuality to the equation, you have a recipe for derision, malice and outright hatred.

The word ’gay’ has become synonymous with ’fag’ in the black community. ’Gay’ has such a negative connotation it has almost become equivalent to the word ’nigger.’ The hardest part about being Black and gay is dealing with ignorant heterosexual black people. From Bible thumpers to gang members, it seems like almost everyone in the black community hates gay people.

But it doesn't have to be, and this is what I want all gay men to understand. It doesn't have to be. [But] this book is not about men coming out. This was a very personal choice for me. I am willing to take on anyone who wants to judge my life and my love of God and His for me. I am not ashamed of who I am. I refuse to live in my own shadow or anyone else's shadow.

This book may jeopardize my teaching career and family ties. But if I can teach gay men how to live a fulfilling life the same way I taught myself and thousands of students, it will be well worth it.’
’Excerpted from Chapter One, ’Genesis’

Eric ’Aviance’ Sneed is a world-renown recording artist who has had two #1 hits on the Billboard dance music charts. But because the popular singer is also gay and a drag queen, he was recently brutally beaten in a bias attack on the streets of Manhattan right outside of the club where he had just finished performing.

What makes this story of import, here, is that both the 38 year-old Aviance and the half-dozen, homophobic hoodlums who broke his jaw and left him lying on the pavement near death are African-American. Witnesses told the police that while this horrifying black-on-black crime was being committed, the sadistic perpetrators gleefully chanted anti-gay slurs, including ’Kill the queer!’ and ’Kill the faggot’ as they took turns stomping him into a state of unconscious.

That sort of behavior is what makes Don't Shoot! I'm Coming Out all the more timely, for this book is the best yet at breaking down what it's like to be gay from a black perspective. The author, Benn Settfrey, is a graduate of Marquette and was a top-flight, public schoolteacher for ten years till he chose to retire upon the publication of this intimate memoir/advice manual.

Not one to mince words, Benn is a very effective educator who knows how to entertain as he relates his own life story in frank, but frequently funny fashion. For instance, he explains what it was like to be on the down-low, and how tortured his soul felt at having to listen to bigoted remarks without responding for fear of being outed.

Benn proves to be quite a gifted writer, whether recounting the comical attempt of a female colleague to seduce him, or describing in vivid detail the terrible toll that freebasing cocaine and stealing his big sister's bi-sexual boyfriend as a teenager took on his family. The bottom line is that he hopes to serve as inspiration to other gays by coming out of the closet and commanding respect because, as he puts it, ’Being gay is not a lifestyle choice- living gay is. Living a lie is always an option, but why should I have to?’ Indeed, why should he or anybody else have to?

A book that ought to be on the mandatory reading list of every high school course teaching tolerance in the ’hood.