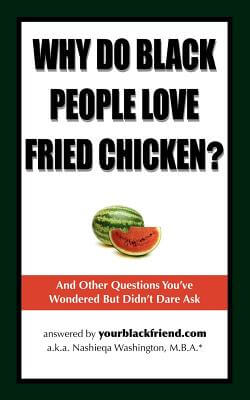 Read a Description of Why Do Black People Love Fried Chicken? And Other Questions You’ve Wondered But Didn’t Dare Ask

"The primary purpose of this book is to provide information about black folks… Please read with the understanding that neither the publisher nor author is engaged in race-baiting, rendering sociological, psychological, or any professional advice. The overall goal is to educate and entertain…

As a non-angry black woman, I've been able to compile these questions because of the level of comfort people felt approaching me and asking them… The questioners have ranged from those who have little or no contact with blacks to those in intimate relationships (some marital) with a black person.

I have received questions so regularly that I am convinced that the publication of answers provides a much-needed service. So with the hope of improving relations and in order to spare other black folks, within these pages you will fid the answers to many of your questions."
—Excerpted from the Message to the Reader (pages 1-2)

Over the years, many an unscrupulous author has assumed an alibi in order to pass as a member of another ethnic group. Perhaps the most infamous of these so-called "slippery characters" was Ku Klux Klansman Asa Carter who faked a Native American background to publish "The Education of Little Tree," a critically-acclaimed memoir about growing up Cherokee which not only topped the NY Times Bestseller List back in the Seventies but won the Book of the Year Award as well.

Truth be told, Carter was an inveterate segregationist and white supremacist who attacked Nat King Cole when he came to Alabama to perform in 1956, and who castrated a black janitor a year later, before being hired by Alabama Governor George Wallace as his speechwriter. So excuse me for being a little skeptical about Why Do Black People Love Fried Chicken, and wondering whether the person posing as the suspicious-sounding Nashieqa Washington was an opportunist or actually African-American.

As it turns out, Nashieqa is, in fact, a sister, although her real name is Pam Moore. Furthermore, the asterisked MBA after her name on the cover came not from her earning a business degree but rather from her being a "Member of Black America."  She does, however, have a BA in Political Science from Cal State, which I guess is more than enough to set yourself up as an expert on black folks nowadays.

Basically, her book is designed to address 66 of the most common questions that curious white people have repeatedly asked her about African-Americans, ranging from "What is CPT?" (The true black ETA at an affair) to "Why don't black people get wrinkles?" (Because black don't crack) to "Do blacks deserve reparations? (Yes, past due wages, plus interest) to "Can black people be racist?" (No.).

Nashieqa doesn't presume to speak for all black people, instead stipulating that her conclusions were arrived at based upon anecdotal evidence and her own personal observations, not anything scientific. Thus, her responses are intended to entertain as much as they elucidate. Sometimes, she even admits to being stumped, like by the query, "Why do black people talk to the movie screen?"

Some of the answers will inflame African-American readers (See: "Why are blacks so lazy?") while others are just as apt to annoy whites, (See: "Is everything related to slavery?") especially since the author is earnest in her endeavor to generate frank conversation across the color line's cross-cultural divide.

Overall, I found the book to be both fun and thought-provoking, if not at all dispositive or the last word on any particular topic. Ultimately, it probably proved more revealing of the author's mindset than of any monolithic African-American cultural traits. For who would bother to give such serious as opposed to tongue-in-cheek answers to questions reflecting underlying racist assumptions such as "Why are blacks so paranoid?" "Why do black people speak improper English?" and "Why are black women always angry?"

Nashieqa Washington would that's who. I say now it's Pam Moore's turn to emerge from the shadow of her alter ego and make herself vulnerable by writing an intimate autobiography tackling similar subject-matter. For it's easy to read between the lines, here, to sense that Ms. Moore has played her cards close to the vest and might be ready to share a brutally-honest tell-all about what it really feels like to be a black woman in America.