Book Review: Turn The Page And You Don’t Stop: Sharing Successful Chapters In Our Lives With Youth 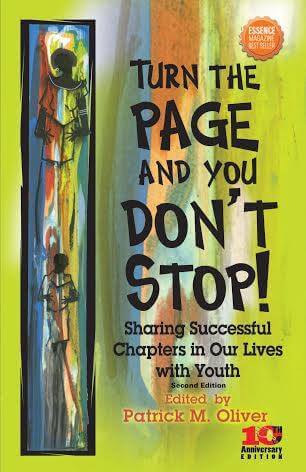 Read a Description of Turn The Page And You Don’t Stop: Sharing Successful Chapters In Our Lives With Youth

It is because of my first-hand experience with children and youth, watching them change before my eyes as they learned to read and grasp what they had read; it is because of the many parents and educators who articulated their desperation to find ways to help their children read, that Turn the Page and You Don’t Stop was born.

There is an old Jesuit saying which goes, ’Give me the child until he is seven, and I will show you the man.’ If you believe the words of that wise maxim, then you know that early intervention is the answer to the woeful literacy and high school graduation rates which come to permeate the African-American community.

For some reason, reading isn't generally considered cool among most black teens, especially males, in inner-city schools, a self-destructive attitude which only lessens their prospects for success later in life. Fortunately, Patrick Oliver has staked his career on reversing this suicidal trend. Oliver, co-founder of the Black Male Development Symposium, has been making significant inroads as the director of the Open Book Program, a city-wide reading project in Chicago.

And now he has decided to share his strategy with the rest of the country as editor of Turn the Page and You Don't Stop: Sharing Successful Chapters in Our Lives with Youth, a valuable how-to book designed to inspire youngsters with an interest in reading. He makes his case first by pointing out that even entertainment icons must master the language, citing Grammy-winner Erykah Badu who studied theater at Grambling State University and the late gangsta rapper Tupac Shakur who attended the Baltimore School of the Performing Arts.

Then, the author allows each of his 26 contributors (including Dr. Julianne Malveaux, Haki Madhubuti and Patrice Gaines) to write a chapter aimed at whetting a thirst for knowledge in impressionable adolescents. Though the collaborators' styles range from the lyrical poetry of Parneshia Jones, E. Ethelbert Miller and D.H. Melhem to the revealing memoirs of Gaines, Madhubuti, Latoya Wolfe and Sandra Govan to the imaginative fiction of Ivory Achebe Toldson to the no-nonsense advice of David Miler, all the pieces share the book's prevailing theme, namely, that developing a passion for reading at an early age is critical to expanding a child's horizon and thereby maximizing his or her potential.

A useful guide to encourage at-risk kids, or ones who just might not yet think of themselves as bookworms, to become voracious readers and thereby adopt a path aimed at academic achievement.

About the Author
Patrick M. Oliver is currently Program Director for the Open Book Program a city-wide reading project in Chicago, IL. Mr. Oliver is founder of the Say It Loud! Readers and Writers Series and co-founder of the Black Male Development Symposium. A respected marketing consultant and program development specialist, Mr. Oliver has organized and promoted literary events throughout the country featuring award-winning authors.

Read Say It Loud! Readers and Writers Series’s description of Turn The Page And You Don’t Stop: Sharing Successful Chapters In Our Lives With Youth.