Book Review: Slaves with Swag: The Negroes Your History Teacher Forgot to Mention 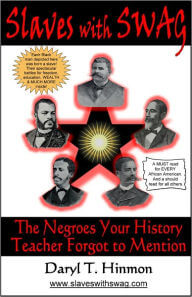 Read a Description of Slaves with Swag: The Negroes Your History Teacher Forgot to Mention

The intent of this book is to provide not very well publicized facts as documented by past historians... This book is not offered as an all-encompassing history book, but rather as a guide to offer the reader a different perspective of the ‘History’ discipline…

If, after reading this text in its entirety, you have not learned anything new and have not experienced a different perspective of history, contact the publisher for a full refund of the purchase price.”
—Excerpted from Introduction

Very rarely does a book come with a money-back guarantee. But that is precisely the case when you invest in Slaves with Swag by Daryl T. Hinmon, a riveting read which endeavors to fill in some of the blanks in black history.

For, it is the author’s contention that the generic, grade school education leaves most students with “the very false impression that ALL slaves were submissive, timid, illiterate, severely oppressed and dirt poor.” So, he sets about disabusing us of that conventional wisdom via biographies of some heroes who defied that very demeaning definition of African-Americans forefathers.

In fact, the five gentlemen pictured on the book’s cover were slaves who had been anything but deferential. In total, this informative tome highlights the escapades of over fifty of these so-called “slaves with swag,” in an attempt to illustrate just how widespread resistance to the institution of slavery really was.

For example, Hinman recalls how young Isaac Burgan struck a white man in the back of the head with a poker to save his mother from a whipping at the hands of a sadistic overseer. The text also chronicles a newspaper account of a 1774 revolt by six male and four female runaways who killed their owner in the field before proceeding inside the big house to slay his wife and son. They continued the rampage on a couple of neighboring plantations until the rebellion was crushed and the participants lynched.

A treasure trove of fascinating stories about intrepid souls ignored by history who were willing to make the ultimate sacrifice in the name of freedom. Satisfaction guaranteed, too!

Read Knowledge of Self Publishing, LLC’s description of Slaves with Swag: The Negroes Your History Teacher Forgot to Mention.