Book Review: Why African Americans Can’t Get Ahead 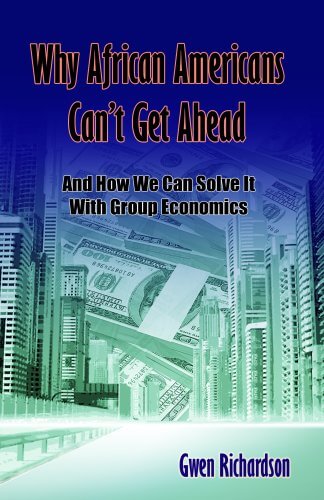 Read a Description of Why African Americans Can’t Get Ahead

’Unemployment rates for African-Americans have historically been twice as high as for white Americans' and the plight of young black males is even worse, especially in the country's inner cities' An even more telling statistic shows that less than 1 per cent of jobs held by African-Americans are created by African-Americans. In other words, we are literally dependent upon other groups for our very livelihoods.

Further, the problems facing the African-American community are no longer on the political radar screen’ Political leaders have made appeals to the federal government to solve these problems, but after 40 years of persistently high unemployment rates and repeated studies showing little improvement, it is incumbent upon African-Americans to identify solutions and reverse this trend ourselves.

If African-Americans are to be treated as a group, we might as well act as one where economics is concerned. Practicing group economics, making a conscious decision to spend a significant percentage of our dollars within our community so long-term jobs can be created for our children and grandchildren is the only way to reverse this disastrous trend.’
’Excerpted from the Introduction (pages xx-xxi)

Why is it that blacks have lagged behind most other American ethnic groups in terms of economic progress? According to Gwen Richardson, the key to financial success might lie in unity, a willingness to patronize black-owned businesses. As proof, she points to the success of Jews, Asians, Haitians, West Indians, Arabs and even gays, all minorities much smaller in size than the 40 million who comprise the African-American segment of the population.

Each of those other groups has nonetheless flourished by maintaining a cultural identity, rather than exercising the option ’to fully assimilate into American society.’ Consequently, not only are they able to take a measure of ’pride in being a closed society,’ but they are simultaneously able to keep capital in their communities and thereby build an array of flourishing financial institutions.

In Why African-Americans Can't Get Ahead, Ms. Richardson makes a passionate appeal for a collective black mindset in terms of money matters. And, in numerous case studies, she eloquently illustrates why she feels this approach is imperative, such as in her discussion of how Koreans came to control the bulk of hair care supply stores in black communities all across the country.

The author, a graduate of Georgetown University with a B.S. degree in marketing, is not just some ivory-tower intellectual with impractical Pan-African notions. No, she bases the ideas in this, her first book, on her practical experience of 20 years spent as an entrepreneur, which included co-founding with her husband, Willie, Cushcity.com, the largest African-American internet retailer.

Why African-Americans Can't Get Ahead, an eye-opening game plan for advancement, offers some cutting-edge, 21st Century solutions for the host of persistent economic woes still plaguing the bulk of the black community despite the considerable inroads made since the Sixties in terms of integration and basic civil rights.

Read Cushcity Communications’s description of Why African Americans Can’t Get Ahead.