Book Review: The Brand Within: The Power Of Branding From Birth To The Boardroom (Display Of Power Series) 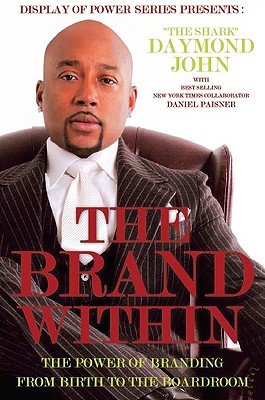 Read a Description of The Brand Within: The Power Of Branding From Birth To The Boardroom (Display Of Power Series)

"What I hope to do with this book is reach out to anyone who wants to get a leg up on their own careers… And more than anything else, it's a book meant to remind readers that they will prosper from making the right choices, from conducting themselves in the right way, no matter what stage of the business world they happen to occupy.

I'll look back and offer examples from my FUBU career to illustrate certain points… My hope is that readers walk away from this book realizing it's not enough to talk the talk. You've got to walk the walk, if you mean to get and keep ahead."
-- Excerpted from Chapter One (pgs. 29-30)

At 41, Daymond John might not seem old enough to be writing his second autobiography, but after perusing The Brand Within I'm convinced that far more important than chronological age are a person's accomplishments and ability to share pearls of wisdom in an engaging and informative fashion. Daymond definitely achieves all of the above in this combination memoir/ marketing handbook written in a culture-crossing style that ranges from street to sophisticated.

One minute, he might drive home a point via salty language like "All I have is my balls and my word, and I don't break ‘em for no one." The next moment, he is just as likely to resort to terms generally employed in corporate boardrooms to explain complex business concepts.

In either case, Daymond is an entrepreneur to be taken seriously, if only because he built a haberdashery started in his mother's basement into a multimillion-dollar fashion empire. FUBU, founded as "Five Urban Brothers United" in 1992, eventually was strategically changed to "For Us, By Us," a backronym conveniently exploiting the popular notion that the company's styles were made by blacks for blacks.

Here, the enterprising Mr. John emphasizes the importance of self-branding, urging his readers to recognize and make the most of any opportunity to enhance their image. "From the day you're born, you're branding yourself," he says. "You are what you wear. You are what you drive, where you live, what you drink…' etcetera. Consequently, "Every move you make will establish… how the world looks back at you."

While it isn't exactly pleasant to think of the road to riches as paved by a series of critical consumer decisions, who am I to argue with a guy this successful and so convincing when he makes a case that, "Like it or not, intentional or not, you will be stamped—branded… and once you've been tagged, it will follow you around." Branding as the blueprint for making it in the 21st Century.

Read Display of Power Publishing, Inc.’s description of The Brand Within: The Power Of Branding From Birth To The Boardroom (Display Of Power Series).