Book Review: Am I Not A Man - The Dred Scott Story 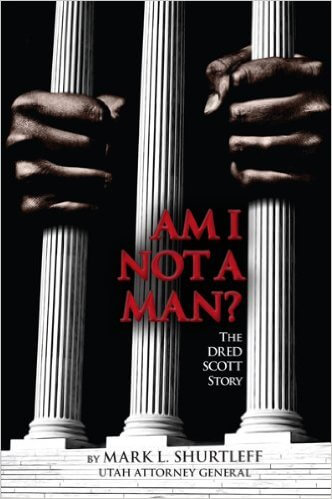 What a curious book to be written by Mark L. Shurtleff, Utah's Attorney General!

This well-researched historical novel, Am I Not A Man?, goes into the mind of Dred Scott, an illiterate slave who endured the agony of bondage and all of its cruelty from his early days in Virginia until his classic legal battles to over-turn the restrictive laws of slavery.  Shurtleff, a white author,  never lets us forget these black men and women were human beings.  He shows the reader that Dred and his wife, Harriet, were loving, caring people. He takes us into their minds and hearts and trusts us with their unrelenting humanity.

For those unfamiliar with the indecent American institution of slavery, Shurtleff includes a brief history of some of its landmarks of the political, commercial, and legal highlights through the years. The recreated dialogue with James Madison and Thomas Jefferson of the strategies of possessing Blacks as chattel is on par with any of the top-notch practitioners of current historical fiction. Although the novel is sometimes confusing in bouncing around in its narrative timeline, Shurtleff paints a balanced picture of the morally conflicted framers of the Constitution and the creation of the flawed democracy they envisioned. It provides a historical context for the Dred Scott tragedy.

However, the central character is Dred Scott, the young man working in the cotton fields of Southern Virginia, employed later as a house slave, and later retained as an assistant with soldiers. Some Blacks forget the importance of the abolitionist movement, including Harriet Beecher Stowe's anti-slavery novel, Uncle Tom's Cabin, of which the sympathetic Blow family, owners of Dred and Harriet, made it possible for the Scotts to sue for their freedom. The legal fight was difficult. In January 1850, a jury of whites, including some slave owners, declared Dred and his wife were forever free under the law of Missouri.

Some of the most stirring moments in the novel are the legal war-of-words before the white Justices in the High Court by Roswell Field, a firebrand abolitionist lawyer and defender of fugitive slaves. The abolitionists were determined to push the white political elite to confront the evil of the slavery issue.  "I would humbly request that each of you, at some point during your deliberations, consider for just a moment what it would be like to lose your freedom. What it would feel like to be a slave — the chattel of another? What it would do to you to have the majority of those around you consider you as something less than a man? I believe that doing so, you will be at peace and able to fully and fairly do justice for the man who placed fifty years of trust in the system, and you are it."

When the justice ruled against Dred and overturned the decision of the jury, returning the Scotts to slavery. It is to Shurtleff's credit as a writer to portray the very real feelings of Dred and Harriet as they learn of the judgment. After the verdict, the sheriff cuffed Dred and said his jailing has to be because the law doesn't know what to do next. Still, the Scotts survive the shattering ruling. Dred's death is used by the abolitionists to win liberty for slaves and to influence President Lincoln's Emancipation Proclamation. Illuminating, sensitive, and powerful, Shurtleff's fictional take on Dred Scott asks some timely questions of race and prejudice that have still not been answered.

Read Sortis Publishing’s description of Am I Not A Man - The Dred Scott Story.