Book Review: The Adventures Of Sasha And Malia At The White House 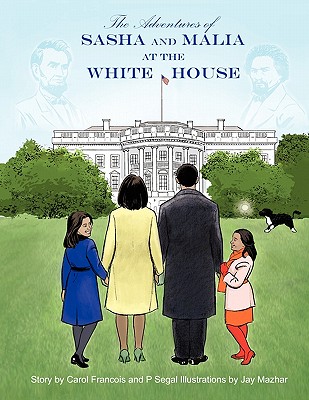 by Carol A Francois and P Segal

"[This] story came to me in a dream one night not long after the inauguration of President Barack Obama… I decided to publish this book because young people are not always taught about racism, slavery and the unpleasant parts of America’s past…

Children growing up today might think that because we have a black president, such opportunities might have always existed for people of color in this country. Throughout U.S. history, many black leaders have fought for a more fair and just society, thus paving the way for President Obama to achieve this great honor."
--Excerpted from the Preface by Carol Francois (pg. 3)

When Barack Obama made history by becoming the first African-American President, so did his little girls, Sasha and Malia, as the first black children to move into the White House. What might life be like for them, between their father’s lofty status as the leader of the Free World and their maternal ancestors’ centuries-long quest for freedom and equality in a country with an ugly legacy of racism?
That is the conundrum confronted by co-authors Carol Francois and P Segal when collaborating on their children’s novel about the First Daughters. The pair came up with quite an entertaining, fanciful tale which has the two sisters discovering a portal on the White House grounds through which they are magically teleported back 150 years to a time when slavery still existed.

In the early 1860s, Sasha and Malia discover a Washington, D.C. very different from the one they know, a place where abolition was in the air in spite of the omnipresence of oppression on the basis of skin color. Soon, they find themselves recruited by a 12 year-old boy who enlists their assistance in delivering to President Lincoln a draft of the Emancipation Proclamation written by his father, Frederick Douglass.

The dangerous mission is critical not only in terms of both the past and the present because, should they fail, slavery would continue, which means Barack Obama would more likely be picking cotton today than sitting behind the desk in the Oval Office. Of course, the Obamas rise to the occasion while learning a priceless lesson about sacrifices made by courageous martyrs upon whose shoulders their daddy stands today.

Illustrated by Jay Mazhar, including a colorful cover featuring the girls in their iconic, J. Crew inauguration outfits, this time-travel saga reads like a literary variation on Back to the Future. Sasha and Malia’s Excellent Adventure!

Read New Vision Works’s description of The Adventures Of Sasha And Malia At The White House.