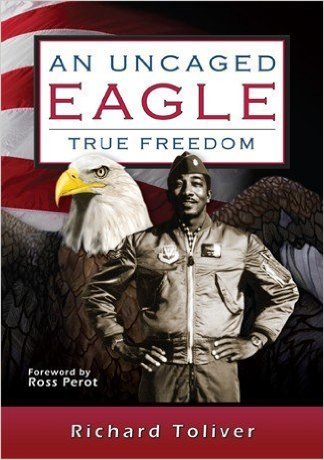 Read a Description of An Uncaged Eagle - True Freedom

"This autobiography tells the story of my life while highlighting some of the tremendous people who helped me overcome adversities I faced and become who I am today. The odyssey begins with my family's escape from the Ku Klux Klan in the backwoods of Louisiana in 1942.

It continues with my boyhood days on dirt streets in Shreveport… It chronicles my Air Force career that included 446 combat missions in Southeast Asia... It is the story of the youngster who earned three dollars a week on his first job and ended up working for billionaire Ross Perot...

This book was written to inspire and motivate those who may still be trapped in an emotional cage of despair and frustration. Hopefully, they will be encouraged to seek the freedom I was blessed to find “ the freedom to create, dream, forgive, love, and to pursue the life meant for us by our Creator."
—Excerpted from the Introduction (pgs. xii-xiii)

Richard Toliver was born in Bellevue, Louisiana in 1938, a perilous time to be black in the Deep South. When he was just a toddler, his father became embroiled in a boundary dispute with a racist white neighbor who was brazenly stealing land and livestock that had been in the family for generations. Although the social mores of the day dictated that African-Americans were supposed to be deferential in the face of such injustices, Dick's dad decided to stand up for himself as the provider for a wife and five young kids.

But when word reached the local Ku Klux Klan of the existence in town of an uppity black man, a lynch mob was organized, and the Tolivers barely escaped with the clothes on their backs. In the process, however, they lost the farm and everything else they owned.

Despite the traumatic incident which ruined his family financially, Richard didn't subsequently become embittered during formative years marked by poverty and Jim Crow segregation. Instead of hating whites or the country which denied him equality, he overcame a host of obstacles via a combination of faith, patriotism and personal intestinal fortitude.

An Uncaged Eagle — True Freedom chronicles Dick's rise from the humblest of origins in Shreveport, Louisiana to a distinguished, 26-year career in the U.S. Air Force. Here, in a colorful and most entertaining fashion, the highly-decorated retired Colonel recounts the highs and lows of a life well-lived.

Precisely the sort of real role model deserving of accolades during any Memorial Day-Father's Day season.