Book Review: The Summer of my Fifteenth Year 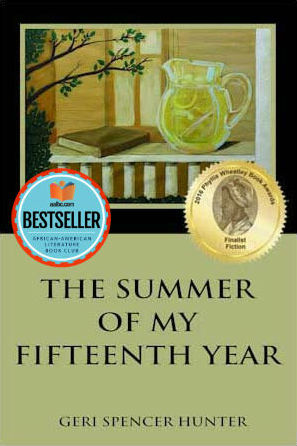 Read a Description of The Summer of my Fifteenth Year

There are so many gems to be discovered in independent publishing. Every now and then, you come across the book that makes your mind sit up and take notice. If a writer wants to put his or her focus on a loathsome cultural issue that society would love to be shoved under the run, the editors of the established publishing world usually step over it and look elsewhere. This book’s author, Geri Spencer Hunter, a retired Public Health nurse and a great-grandmother, has written a gem and it should have published by one of the big reputable houses.

Why is incest so despicable? Why is it about this abhorrent form of sex that makes people cringe? In Hunter’s second novel, The Summer Of My Fifteenth Year, she concentrates on the Netters, a wealthy Black family in a small Iowa town during the 1930s, and the return of the favored son, Charleston Epstein Netter. At present, Etta, now eighty-six, is recounting that summer that changed her life and shattered the calm of her family with a scandal that would sink most households. She sits in her favorite chair on the porch where she was born, telling her story into a tape recorder.

Etta’s story slowly gathers steam as she introduces her siblings, the arrogant but charming Charlie and her big sister, Rebecca. Charlie is a student at Normal Academy, a colored college in Tennessee, and loves academic life. He really doesn’t want to go home but he knows his family will dote on him. Music is his passion. He plays trumpet in a band. Etta thinks Charlie has changed since he went away to school.

The seduction is slow and gradual as in real life, sweet words of flirt and flattery, spontaneous gifts, tender caresses, and crafty mind games designed to overwhelm young hearts and virginal innocence. In the hormonal firestorm of puberty, Etta knows right from wrong, but is powerless to match Charlie’s potent onslaught or the spellbinding lustful stare of his eyes. Unseen by the other members of the family, he mastered the courting gestures of any casual seducer without giving her any promise or commitment.

“My feelings for him were beginning to confuse me,” Etta confesses. “He was my brother. But when we were alone, just the two of us, he didn’t like it…And I’ll admit I was beginning to like all his attention. I didn’t have a boyfriend, but suspected this was the way one would make me feel, all excited and cute and grown-up special.”

Knowing that he will return to college shortly, Charlie pushes up his timetable, choosing to make his conquest on a hot afternoon away from home. He got on top of her, unzipped his pants, pulled up her skirt, and did his business. “My body seemed out of control like some “thing” had taken it over, possessed it, leaving me helpless and at its mercy,” Etta remembers the horrible event. “He collapsed on top of me. I couldn’t breathe. I thought I was dying. Frantically, I started pushing and shoving, trying to get free. He rolled off, breathing loud. I lay still, trying to step the confused thoughts swimming in my head. I couldn’t move, refused to think, and believe what he had done.”

Choices have consequences, as anyone knows about this life. Only an unwanted pregnancy reveals that fiendish act perpetuated on Etta. When the truth comes out, it is the father, who is outraged and feels betrayed by his son’s cowardly deed, goes in search for the rapist. After the father pulls a gun to his son’s head at one of his club dates, this is when the story really picks up, because sometimes it is not the malice of the behavior but what comes afterwards. Again, Hunter doesn’t tie up the book’s harsh drama with a bow but confronts the repairing and healing of the lives that must go on.

Clearly, The Summer Of My Fifteenth Year is a powerful piece of writing. Hunter’s characters are finely etched, their motives realistic, blended with a subject matter repulsive to most. Yet this crime happens almost every day. Some survive its lethal sting, others do not. This is an effectively written novel with a narrative clean and brilliant, refusing not to sully its story or message.

Read Blue Nile Press’s description of The Summer of my Fifteenth Year.