Book Review: A Matter Of Life Or Death, Why Black Men Must Save Black Boys In America’s Public Schools 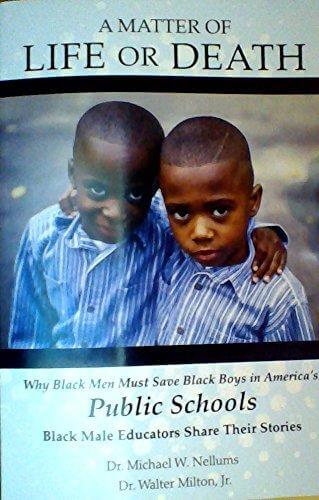 Read a Description of A Matter Of Life Or Death, Why Black Men Must Save Black Boys In America’s Public Schools

“Life for many black boys is akin to a war. Wars on their minds, souls, spirits and yes, even their bodies take place on a daily basis. It is my desire that our sons become equipped with an artillery of excellence, weapons of mass knowledge/information and a navigation/GPS system that will help them avoid life’s roadblocks…

The co-author of this book, Dr. Michael Nellums, an accomplished educator… and I are dedicated to creating a resource for parents, students and community members. Our work in environments populated with black male students has propelled us to join in the pursuit to write this book…

It is our firm belief that readers will find our project meaningful and helpful in their fight to combat the numerous and varied challenges that impact our boys.”
—Excerpted from the Prologue by Dr. Walter Milton, Jr. (pgs. 1-4)

Despite the implementation of numerous educational programs since the Sixties such as Head Start, No Child Left Behind and, most recently, Race to the Top, African-American males continue to fare poorly in the nation’s public high schools. Rather than wait for the next federal initiative, Dr. Michael W. Nellums and Dr. Walter Milton, Jr. have decided to do something about it, given the prospect of having yet another generation of inner-city black boys slip through the cracks.

As a principal and former school superintendent with a combined 40+ years of service in the field, these African-American academics feel strongly that it is incumbent upon folks like themselves to intervene. So, they enlisted the assistance of fellow educators in writing: to write A Matter of Life or Death: Why Black Men Must Save Black Boys in America’s Public Schools.

The book is a collection of introspective essays containing the reflections of brothers serving in positions ranging from teachers to counselors to mentors to principals to superintendents of schools. Relying heavily on personal anecdotes, each of the contributors explains his unique approach to the pressing problem.

For example, teacher Henry Kleckley talks in heartfelt fashion about how he sees middle school as a critical turning point where black boys are suddenly “at risk of becoming and creating another statistic” if they don’t have a black male role model in their lives. He goes on to explain how he has engaged these kids in his classroom via a novel variation on the three R’s, namely, Relationship, Relevance and Rigor. What’s involved is establishing a positive relationship based on mutual respect while teaching relevant course material offering a rigorous challenge.

The book closes with a how-to chapter containing ten bits of advice to be shared directly with black boys. These pearls of wisdom include: “Learn how to read,” “Establish goals,” and “Preparation for your profession begins in the classroom,” to name a few.

A viable game plan shining a vital beacon of hope for a marginalized, much-maligned demographic in increasingly dire straits.

Read One-L Group’s description of A Matter Of Life Or Death, Why Black Men Must Save Black Boys In America’s Public Schools.