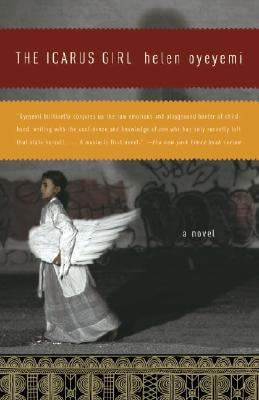 Read a Description of The Icarus Girl

Jessamy Harrison is an eight year-old, Afro-British girl, who writes haiku, reads Shakespeare, and just skipped a grade in school.  Jess' parents -- a Nigerian writer mother and a British accountant father -- willingly live in a comfortable, hazy world of their own creation.  But can their two disparate worlds exist in serene unity?  Somewhere in this raggedy mix there is a combustible element that ignites struggles between white and black, light and dark, ancient and modern, technology and primitivism.  One partner in these dances must die.

The Icarus Girl is almost transcendent, seamlessly weaving the perspectives of Greek myth, Yoruba folklore and the cosmopolitan sensibility of modern day London, into a suave, satisfying, well-crafted psychological thriller.  The Icarus Girl is an impressive debut novel for any writer, but especially for 18 year-old Afro-British author Helen Oyeyemi.

Oyeyemi masterfully creates the conflicted persona of Jess, but the real commanding presence of The Icarus Girl is Titiola -- a scraggly, energetic, puffy-haired girl who Jess befriends while visiting Nigeria.  Like an avenging super hero Titiola unleashes a formidable array of powers, along with an uncanny ability to exploit Jess' fears, and "get" Jess' enemies.

Where Jess is cerebral Titiola is a bold actor who creates space for Jess' to be.  Jess' desire for vengeance -- to "get" people who scorn her bi-racial existence -- is an understandable response toward tormentors.  But does Jess dare trust Titiola's guidance, especially in light of the macabre events that occur as Titiola becomes more menacing?  "Stop looking to belong, half-and-half child.  Stop.  There is nothing; there is only me and I have caught you."  PAGE 261.

The adults in Jess' life offer no answers.  "Jess already knew’that parents fixed nothing.  They only pushed things to the bottom limits of worse."  PAGE 287. Jess' parents represent the joining of "civilized" England and the "Dark Continent" of Africa, but some valuable qualities are lost in this co-mingling.  Jess' mum, while highly educated, is clueless, having been willingly co-opted into the British world.  Jess' father is loving, but also clueless, ineffectual, and unknowingly contemptuous of Nigerian culture (witchdoctors, voodoo, et al).

Jess' formidable Nigerian grandfather respects Christianity while remaining grounded the ancient cultural perspectives of the Yoruba people.  "Here is where kingship lives. I am a princely man and my children therefore should be proud and strong.  Everyone who hears my name and knows my people should know that."  PAGE 30.  His rigid, third world knowingness provides Jess with a wholeness of which western thinking can not conceive.

Unlike Icarus who fell to earth when his wax wings melted from the sun's heat, Ms. Oyeyemi will only rise higher in her exploration of uncomfortable realms.  Readers are urged to get in on the ground floor of an awesome career that will only get better.