Book Review: The Root of All Evil 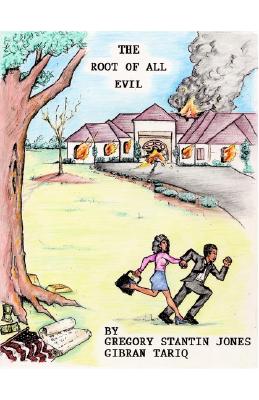 Read a Description of The Root of All Evil

Read an Excerpt from The Root of All Evil

Just as many African-American readers have started to complain about the lack of depth in of Black Literature, complaining about the all-too-familiar plots of the urban genre, along comes a novel that, for the most part, is a thrill to read. What authors Jones and Tariq have done in The Root of All Evil, their debut work, is to do readers a favor by both entertaining and educating them.

At the heart of this exquisitely written novel you’ll find social reality wedded to the urban imagination with so many distinctly Afro-centric twists that you’ll find yourself exhilarated by the sheer power of the story. (5 years research went into the novel)

The book literally bursts from its cover with the introduction of the Merchant Twins, Gulliver and Tolliver, who are locked into a fierce internal struggle over which of them will control their family real estate empire, but they soon realize they have an even bigger problem which threatens to destroy not only their vast financial holdings but the entire structure of white America as well.

What the twins discover is this country’s best kept secret: that in 1933 when the U.S. declared itself bankrupt and had to borrow money from foreign bankers to prevent the total collapse of he government that the debt was never fully repaid. The truth is that America was forced to surrender all the country’s gold reserves until suitable collateral could be found. Now here’s the historical shocker (and it’s true!). In March 1933, at a conference of Governors, the governors of all the states decided to put the people of the United States up as collateral! (Did you know that upon birth, your birth certificate is then sent to the Department of Commerce and endorsed as a negotiable instrument? Did you know that your taxes go to pay this debt?) (Do your own research)

From this point the story zooms along, churning out the news that it was the Illuminati who had masterminded and engineered the bankruptcy, but that Paul “mad-dog” Madsen as he was near death traveled to America in 1942 and as an act contrition for all the wrongs he had committed against humanity bestows all his tremendous wealth to the first black man he encounters, a cook in a greasy spoon New York diner. With immense calm, Madsen explains to Bernie Morris how the stock certificates and bonds have just made him “The Richest Black Man the world has ever seen.” Madsen therefore hopes that his kindness will spare him from hell. In addition to the stocks and bonds, Madsen also bequeaths to the Morris family a jewelry box wherein is hidden the deed to this country. The only other copy of the document is stashed in a Swiss bank account.

Bernie Morris and the Merchant families are two very different groups of people, but when they find their histories, their personal fortunes, and their lives intertwined in a deadly winner-take-all gamble, neither side wants to lose.

This is a 5-star must read book.

—Lawrence Brown is a cultural critic from Atlanta

Read Xlibris’s description of The Root of All Evil.