Book Review: Hope On A Tightrope: Words And Wisdom 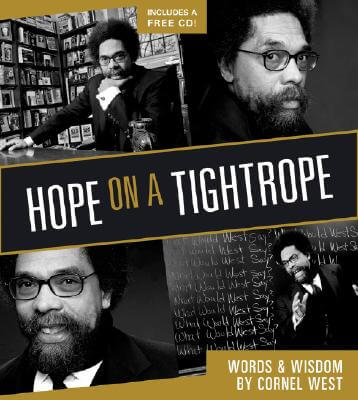 Read a Description of Hope On A Tightrope: Words And Wisdom

’We are now in one of the most truly prophetic moments in the history of America. The poor and very poor are sleeping with self-destruction. The working and middle classes are struggling against paralyzing pessimism and privileged are swinging between cynicism and hedonism. Yes, these are the circumstances that people of conscience must operate under during this moment of national truth or consequences.

We have witnessed the breakdown of the social systems that nurture our children. Our rootless children’ have no cultural armor to protect them while negotiating the terrors and traumas of daily life. Young people need a community to sustain them, so that they can look death in the face and deal with disease, dread and despair. These days we are in deep trouble.

The audacity of hope won the 2008 Democratic primary, yet we are still living in the shadow of the vicious realignment of the American electorate, provoked by the media's negative appeals to race and gender and the right-wing propaganda that bashes vulnerable groups' Real hope is grounded in a particularly messy struggle and it can be betrayed by na've projections of a better future that ignore the necessity of doing the real work. So what we are talking about is hope on a tightrope.’
’Excerpted from the Introduction (pages 1-6)

As the United States stands poised to make history with the impending presidential election, it takes considerable courage for a very public black intellectual like Dr. Cornel West to refrain from jumping headlong onto the Obama bandwagon. But Professor West has opted to remain true to his core values by sharing the sage insight that an African-American occupying the White House will not automatically mean the struggle for equality is over or that we have realized Dr. King’s dream of a post-racial society where one is judged not by the color of his skin but by the content of his character.

In Hope on a Tightrope , an eloquent collection of both audio (on CD) and printed meditations, West indirectly challenges Obama to prove that the ’Audacity of Hope’ is more than a campaign slogan, asking, ’What price are you willing to pay?’ And the author goes on to warn that ’American politics has a way of grinding the best out of a person’ and that ’it reduces their prudent judgment into opportunistic behavior.’

Undoubtedly, there will be many folks who feel it is unfair to ask Obama to focus on the plight of the least of his brethren even before he's had a chance be inaugurated, let alone revel in the euphoria of his stunning accomplishment. Yet, as implied by the Dr. King metaphor he's been so fond of quoting on the stump, there is a ’fierce urgency of now.’ So I say, Dr. West must be commended for so lovingly and frankly reminding Barack of the meaning of that phrase while exploring a litany of themes in a heartfelt manner, topics ranging from leadership to faith to family to identity to education to spirituality to service to social justice.

A passionate appeal to Obama about his responsibility to the masses and the millions of modest contributors who helped put him in office, plus a timely message that ’You can't save the people if you don't serve the people.’

Read an interview with Dr. West as he discusses his latest book  Hope on a Tightrope: Words and Wisdom (November 2008)


http://aalbc.com/reviews/cornel_west.htm
Read SmileyBooks’s description of Hope On A Tightrope: Words And Wisdom.