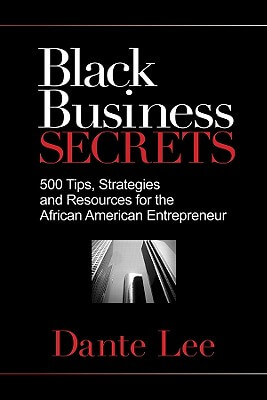 Read a Description of Black Business Secrets: 500 Tips, Strategies, And Resources For The African American Entrepreneur

"Black Business Secrets is dedicated to transforming the devastating statistics that African-Americans are much more likely to fail in business than their white, Asian, or Hispanic counterparts due to a lack of fundamental business education, insufficient economic development, and resources… [The book] offers business tips that will help you get the ball rolling—from consulting to franchises to preparing to enter emerging markets…

Contributions from experienced businesspeople have been central to compiling this wealth of information. They generously gave of their time to provide this warehouse of knowledge… to ensure that your business will shine throughout the 21st Century."

— Excerpted from the Introduction (pg. 10)

During these dire economic times when the overall unemployment rate in the U.S. is at 9.8 %, you can be sure that that figure is at least double in the African-American community. And after the Democrats took what President Obama referred to as a "shellacking" on Election Day, they appear prepared to capitulate to the Republican demand that the Bush tax cuts for the wealthy be extended.

If you're presently out of work, I wouldn't hold my breath waiting for the supposedly-stimulative effect of that windfall for the rich to trickle-down to you in the form of a job. Instead, may I suggest perusing a copy of Black Business Secrets: 500 Tips, Strategies, and Resources for the African-American Entrepreneur.

This invaluable how-to tome designed with ambitious self-starters in mind was written by Dante Lee, a bona fide success story in his own right. He is the CEO of Diversity City Media, the umbrella organization for a number of marquee internet sites including BlackNews.com, BlackPR.com, HBCUconnect.com and BlackHistory.com. Mr. Lee founded the company in 2000 while still in college, and it has mushroomed over the course of the past decade into the largest network of premier African-American web properties.

In Black Business Secrets, the author shares a cornucopia of practical advice based on his experiences about what's involved in getting a profitable money-making operation off the ground. But Dante doesn't rely only on his own anecdotal evidence here, for he also conducted informative tete-a-tetes with such sepia captains of industry as chocolate chip cookie magnate Famous Amos, BET Network founder Bob Johnson, "Reallionaire" Farrah Gray, and reigning wunderkind Ephren Taylor, who is the youngest CEO of a publicly-traded company.

Among the hundreds of tips revealed and elaborated upon in the text are morsels of wisdom ranging from "Learn to Have Thick Skin" to "Don't Wait for the Phone to Ring" to "Learn to Speak Like Obama" to "Never Check Email in the Morning." Although much of what's printed on these pages might be easier read than done, Mr. Lee certainly has a knack for serving up a delectable winning recipe in easy-to-follow, step-by-step fashion.

A plausible primer for financial success for any aspiring entrepreneur armed with a viable business idea and the requisite amalgam of guts, determination and common sense to make their dream a reality.