Book Review: America I Am Pass It Down Cookbook: Over 130 Soul-Filled Recipes 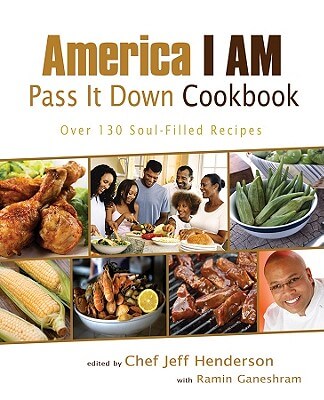 Read a Description of America I Am Pass It Down Cookbook: Over 130 Soul-Filled Recipes

Filled with poignant memories of the past, and the present triumphs of both the acclaimed and unknown black Americans who impacted the way the whole nation eats, this book gives voice to everyday people and their triumphs in the kitchen… [It] also explores how African-Americans have impacted the economy, the iconography, the preparation, and the very spirit of American foods…

Our goal was to create a collection that is both a cookbook and community memoir filled with great food and even better stories… We hope, as you read this book, it will become a way to learn about and share the bounty that is the African-American contribution, not just to food, but to the very identity of this nation."
-- Excerpted from the Preface (pgs. xii-xiv)

Last year, love advice books were all the rage in publishing, at least in terms of the African-American demographic. But judging from the early offerings of 2011, it looks like the how-to focus has shifted from the bedroom to the kitchen.

After all, it's only March, and the Pass It Down Cookbook already represents the fourth opus I've reviewed with a heavy focus on food. Granted the previous tomes, such as Culinary Professor Jessica B. Harris' "High on the Hog," and Janet Jackson's memoir "True You," only had a modest number of recipes, while this one prominently features in excess of 130. Nonetheless, in this reporter's humble opinion, the sudden attention to the black diet is indicative of a trend worth noting.

The Pass It Down Cookbook is the latest in Tavis Smiley's "America I Am" series celebrating 400 years of African-American cultural contributions in a variety of fields. Augmenting the assorted texts is a touring museum exhibition highlighting the undeniable black imprint upon the nation.

Edited by Jeff Henderson, Executive Chef at the Bellagio Hotel and Casino in Las Vegas, Pass It Down is pretty evenly divided between mouth-watering menus and informative history lessons. In terms of the latter, I found former Clinton aide Adrian Miller's chapter on Presidential Chefs quite enlightening. From George Washington's slave Hercules who broke Martha's heart when he ran away, to FDR's head chef Ida Allen, who prepared his boss' favorite dish, pigs' feet, with a Southern flair for guest of honor, Winston Churchill, each entry proved to be fairly fascinating.

As for the recipes revealed here, they include not only traditional soul food like barbecued ribs and fried chicken, but also some heavenly haute cuisine such as blackened salmon and saporous strawberry cheesecake. Overall, Pass It Down stands as an overdue testament to the legacy of legions of underappreciated culinary greats henceforth apt to inspire the next generation of African-American chefs endeavoring to stand on the shoulders of giants.


Read SmileyBooks’s description of America I Am Pass It Down Cookbook: Over 130 Soul-Filled Recipes.