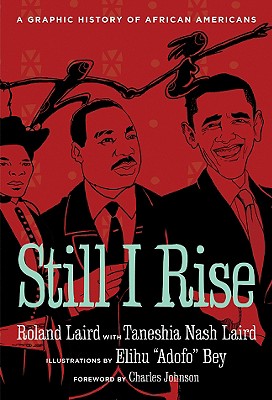 Read a Description of Still I Rise: A Graphic History Of African Americans

’One of the invaluable features of Still I Rise, the first cartoon history of black America, is the wealth of information it provides about the marginalized -- and often suppressed ’ political, economic and cultural contributions black people have made on this continent since the 17th C’ Using pictures, it transports us back through time, enabling us to see how dependent American colonists were on the agricultural sophistication of African slaves and indentured servants; how blacks fought and died for freedom during the Revolutionary and Civil Wars; and how, in ways both small and large, black genius shaped the evolution of democracy, the arts and sciences, and the English language in America, despite staggering racial and social obstacles.

As a contribution to illustrated history from a black point of view, Still I Rise is a unique achievement, one that will be valued by students, educators, collectors and general readers for a long time to come.’
’Excerpted from the Foreword (page viii)

One of the challenges of raising a child for African-American parents is  that most history books are written from a Eurocentric perspective, and there isn't enough time during Black History Month to undo the damage inflicted upon impressionable young minds the rest of the year. And it is easy to underestimate the cumulative toll exacted by semester after semester of syllabus suggesting that Africans were uncivilized heathens and thus deserving of their lot first as slaves and later as second-class citizens.

A People's History of the United States by Howard Zinn is an excellent alternative to that conventional claptrap. However, Zinn's politically-correct encyclopedia is almost 800 pages in length and thus not exactly easy reading. Another viable option is Still I Rise: A Graphic History of African-Americans by Roland and Taneshia Laird. Originally published by the couple a dozen years ago, the text has been updated to include recent developments, including the election of Barack Obama.

The book, which borrows its title from Maya Angelou’s most famous poem of the same name, covers a surprising amount of ground despite the copious illustrations. Warning, don't deceive yourself into thinking it's just for kids because of all the cartoons. To the contrary, it might actually be more for adults, given the subtlety of the humor and the sophistication of the salient points it endeavors to drive home.

Arranged in chronological order, the entries start with the Jamestown settlement and winds its way to the present, cleverly touching on everything from Nat Turner's slave revolt to the Civil War and Emancipation to lynching and Jim Crow segregation to the Civil Rights Movement, the Million Man March and the Obama's ascendancy to the presidency. An engaging, moving and informative means of unlearning and rectifying miseducating wrongs while being thoroughly entertained and even occasionally laughing out loud.