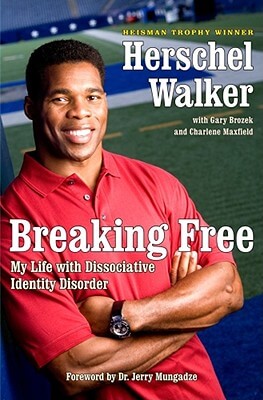 Read a Description of Breaking Free: My Life with Dissociative Identity Disorder

’For most of my life, from childhood onward, I had a form of mental illness that enabled me to be simultaneously a fierce competitor’and a quiet unassuming man who let his actions do the talking. When I was diagnosed with Dissociative Identity Disorder (DID) shortly after I ended my playing career, I wasn't certain if what I was being told about myself was true’

When my doctors explained to me that I had developed other personalities (aka ’alters’) to help me cope with and survive the pain, alienation, and abuse I experienced as a child and adolescent, I was skeptical.

This book’ is a part of my coming to terms with this diagnosis... I want to be sure that readers understand how difficult this is for me [because] I wasn't aware of the multiple personalities who existed in my mind’ I now understand that there may have been as many as twelve distinct alters enabling me to cope with my reality.’
’Excerpted from the Author's note (pages xiv-xv)

In 1982, Herschel Walker won the Heisman Trophy for being the best college football player in the country while only a junior at the University of Georgia. The gifted running back then left school early to turn pro, going on to enjoy gridiron greatness during a 15-year career, first in the fledgling USFL, and then in the NFL.

What neither Herschel or anyone else around him knew, however, was that he’d been suffering since childhood from Dissociative Identity Disorder (DID), what is commonly referred to in layman's terms as multiple personalities. With 20-20 hindsight, this helps explains how he could be so brutally violent on the football field, yet behave like a pussycat away from the game.

But after he retired from the sport, he found it harder and harder to integrate his assorted personas, presumably because he no longer had an outlet for his more aggressive and anti-social alter-egos. As a result, he bottomed-out by not only cheating on but putting a loaded gun to the temple of Cindy, his college sweetheart and wife of 16 years. That ruined the marriage, and the couple divorced, agreeing to share custody of their son, Christian.

Fortunately, Herschel sought out therapy for his inexplicable mood swings, and was eventually diagnosed as having DID by Dr. Jerry Mungadze. Apparently, experts disagree about whether the disease really exists, especially since it seems to affect only people in North America.

Nonetheless, in Breaking Free: My Life with Dissociative Identity Disorder, Walker claims his affliction was triggered by the stress from being teased as a child for stuttering and being fat. But I would hazard a guess that even a casual reader of this revealing autobiography would wonder why he doesn't pin the blame on an incident he witnessed at the age of six when one of his friends was carted off by noose-wielding Ku Klux Klansmen in sheets.

I suspect that perhaps it was either the influence of his shrink or his two collaborators on the book which led Herschel to play down the near lynching. Regardless, the memoir is worthwhile for the shockingly-honest look it offers inside the troubled mind of a revered sports icon.