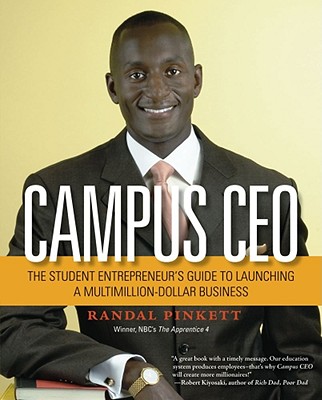 Read a Description of Campus CEO: The Student Entrepreneur’s Guide to Launching a Multi-Million-Dollar Business

’What has been the secret to my success? A big part of it was becoming a student entrepreneur’ You don't have to wait until after graduation to find a career, make money, and begin doing what you love. Instead, you can blaze a pathway to success and generate income now by starting your own business on campus.

In doing so, you’ll take advantage of that unique period in your life--while you're a student’when a range of once-in-a-lifetime perks, advantages, and resources are available to you. As a student entrepreneur, you’ll have access to a number of free resources, from office equipment and computer hardware to graphic design services and office space’

You’ll have virtually unrestricted, one-on-one contact with some of the best ’consultants' money can buy’ the very same professors and teachers you're learning from every day’ The list of benefits for student entrepreneurs goes on and on.’
’Excerpted from the Introduction


You might remember Randal Pinkett as the brilliant Rhodes Scholar with an MBA and PhD from MIT who won America's heart while on his way to landing a job with Donald Trump during the fourth season of ’The Apprentice.’ But it is important to remember that way before he found fame on that phenomenally popular, reality-TV series Randal was already the chairman and CEO of BCT Partners, the very successful consulting firm he had founded years before while still an undergraduate at Rutgers University.

In Campus CEO, the savvy entrepreneur now shares the strategies he relied upon to turn his campus-based business idea into a profitable ongoing operation. Pointing out that the educational system is designed to produce employees, he suggests instead aiming at being your own boss.

Furthermore, he says there's no reason to wait till after graduation to get started, since many a mega-corporation began as the brainchild of a college student, including Microsoft, Google, Dell, Pizza Hut, Yahoo!, Federal Express, Netscape, Kinko's and Napster, to name a few. And since the cost of a higher education has risen dramatically in recent years, most students nowadays need to work to pay for part of their tuition. So, Randal questions the wisdom of being satisfied with ’dead-end jobs that have no relevance to your college program or career goals' when you have the option of getting a head start on life by launching your own moneymaking venture.

’Balancing Business and Education’ comes next, which stresses the need not only to focus on academics but to seek out assistance in your after school endeavor from professors and mentors. And the final section, ’Growing Your Business,’ obviously concerns itself with taking advantage of opportunities to expand.

Mixed in betwixt and between all this sage advice are numerous profiles of accomplished campus CEOs, each case history proof-positive that the system works. By books end, the only logical conclusion one might make is, ’Why be The Apprentice when you can be The Donald?’