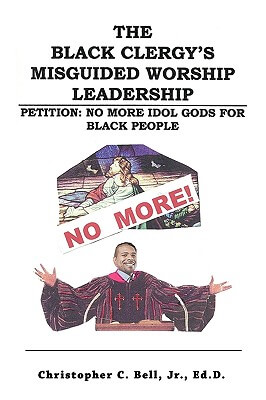 With this defiant publication, The Black Clergy's Misguided Worship Leadership, Dr. Christopher C. Bell, Jr. states his position that white idols have inflicted Blacks with "debilitating white superiority syndrome," adding an element of insidious "emotional emasculation" of Black men in an unfeeling American society. For Dr. Bell, he sees the detrimental effect upon our young males, who act out in negative ways of delinquencies, violence, and crime leading to prison.

Framed as petition with supporting research, Dr. Bell implores the Black Church in this book to stop the worship of a white Jesus Christ, a blue-eyed and blonde deity resembling the actor Jeffrey Hunter or Max Von Sydow. The worship of a white idol stresses the traditional superiority of whites and promotes the notion that God is a white male, according to the author. He sees the open-minded innocence of Black children soaking up into their little minds, absorbing all the tenets of white racism, white privilege, and white supremacy.

Historically, Dr. Bell understands the Black Church is the spiritual cornerstone of wisdom, protest, affirmation, and theological awareness. Understanding this fact, he calls for the religious enlightenment of Black people, feeling the instruction of "a new version of Christianity" would spiritually benefit the souls of young Black men and women. Given the bad behaviors and criminal situations epidemic in this society, he knows that the church's teaching can foster a safety net of support and uplift, self-appreciation, and psychological freedom from the deadly white superiority syndrome.

With this book, Dr. Bell feels it is time to speak the truth, based on his own observations and reflections from Dr. Frances Welsing (The Isis Papers), Jawanza Kunjufu (Adam, Where Are You?), Carter G. Woodson (The Mis-Education of the Negro), Na'im Akbar (Chains and Psychological Slavery) and several European educators and academics. The evidence supporting the theories of this book is confirmed for the most part by both Black and white experts alike. However, Dr. Bell frequently hammers those cogent points home time and time again, saying their themes repeatedly as if he wants to make sure that we, as the readers, are taking him seriously.

Some of the most controversial aspects of Dr. Bell's teachings go to the heart of the power of the Black Church, to the nexus of the esteemed institution. He wants the church to rise and awake to its purpose as an agency of instruction, as a means to cope, adapt, and succeed. The repudiation of myths and superstitions found in the Bible, the author writes, will be difficult to eradicate, such as the concept of virgin births, rising from the dead, ascension to heaven, and walking on water. He realizes it is the magic and spectacle of religion which often attracts the convert to it, the idea of something bigger than human.

Gleaned from a 2006 meeting of the Maryland Prince George's County Chapter of the Southern Christian Leadership Conference, the original petition, from which the book was taken in part, was the brainchild of scholars, clergy, faith leaders, psychologists, and sociologists. They agreed that the goal of Black man should toss the shackles of his mind and achieve psychological freedom and respect, and authentic manhood.

Generally, the Black Clergy's response has been lukewarm with some outright resistance. Many ministers and bishops do not want to break with the white religious traditions and fear a loss of prestige, income, and influence. Also, they fear reprisals from other Christians. With that said, the teachings of the Black Church, once revolutionary and now mercenary, will continue to feed white idol worship, leading Black adolescents, especially young Black males, to a diminished sense of self-worth, and lack of motivation in academics, career achievements, and wealth.

All in all, this is a provocative, insightful book with many controversial social and religious theories. It has been conceived to inspire thought and possible action. Hope springs eternal but the Black Church will not change easily.