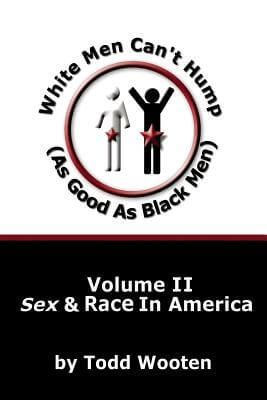 ’Why should black men continue to sit back and allow whites to negatively define black male sexuality, especially when you consider the fact that they privately covet what they say we already possess? One of the main reasons I decided to write this book is because I was tired of being defined by white men who are actually just envious.

Not only can't white men jump, but they apparently can't hump either. And Todd Wooten has so much to say on the subject that it took him a couple of volumes totaling over 500 pages of painstakingly-researched analysis to make his case. Wooten, an ex-Marine, worked as a bouncer, a prison guard, a mall cop, a paramedic and a firefighter before embarking on a new career as a self-appointed expert on mating habits across the color line.

To his credit, the sagacious, salacious sex historian makes up for his lack of credentials with an infectious enthusiasm for his material and a colorful ability to turn a phrase, even if he is prone to profanity. Overall, White Men Can't Hump happens to be quite an entertaining page-turner which rests on the thesis that the legacy of slavery has left black males both devalued and blamed for their collective lower station in life.

Sisters, he says, fare far better than brothers, specifically because they have always been desired by the white male. As proof, he points to the 1860 U.S. census which classified 588,532 individuals as mulattos, virtually all fathered by whites.

He further argues that liaisons between black males and white females are still taboo to this day, which he illustrates by looking at how romance has been portrayed in mainstream movies. Very rarely was Wooten able to find black actors in explicit embraces with white actresses.

Yet, he encountered innumerable instances of the flip side, most notably, Halle Berry's Oscar-winning soft-porn performance opposite Billy Bob Thornton in Monster's Ball. The author even goes so far as to give a breakdown of all of Halle's onscreen love scenes, concluding that she has been far more intimate and shown more skin with her Caucasian leading men than with black ones.

White Men Can't Hump delineates similar data for dozens of other thespians, and, assuming its statistics are legit, it becomes hard to disagree with the book's basic conclusion that American culture, with the help of Hollywood, is intent on neutering the black male. Why? Because of what Wooten calls WMD, White Man's Dread, namely, fear of a black penis.

This timely tome devotes considerable space to some other concerns, such as African-American self-improvement. In this regard, he lambasts the BET network whose programming he describes as ’atrocious' in an eloquent, if expletive-laced, tirade which reads as follows’

’It consists of 20 hours of b*llshit and 4 hours of infomercials. Learn to rap and say ’b*llshit.’ That's quite an educational message to send to black youth. The network is a disgrace and I don't care who owns it or runs it. It's f*ckin’ terrible, period.’

Mr. Wooten is just as blunt when assessing rap music, which he likens to a fad destined to fade away, ala the big bands, doo-wop and disco. ’Hip-hop is not a culture,’ he states emphatically.

Taking no prisoners, White Men Can't Hump is an equal-opportunity offender, and an admirable effort by Todd Wooten to close the human divide by addressing a litany of uncomfortable issues with the goal of eradicating both intolerance and low self-esteem because as stated in the catchphrase printed at the bottom of the book's every page, ’Life is too short to hate.’