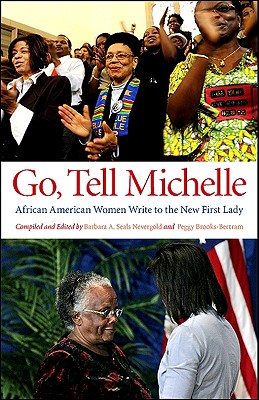 ’This extraordinary collection of letters to Michelle Obama says a great deal about the lives, the hopes, prayers, fears, and aspirations of African-American women today’ We seem to recognize her as one of our own. We are simultaneously proud of her, seek to protect her, and to encourage her. And our expectations for her are obviously very high’

So far, Michelle Obama is serving to help us see ourselves at our best. We see validation of our choices and our values. Even the decision to have her mother accompany the family to the White House resonates with many African-American women who have lived in three-generation homes and know the burden of having a working mother.

The women who have written letters in this collection hail from a broad spectrum of backgrounds and are highly accomplished. So, too, is the recipient. In Michelle Obama, we see reflected the face of inclusion, the face of America as the proverbial land of opportunity, equality and justice. ’
’Excerpted from the Foreword by Dr. Muriel A. Howard, President of Buffalo State College

Over the course of the presidential campaign, Michelle Obama was even more of a target than her husband. Whether being quoted out of context as unpatriotic, lampooned on the cover of a national magazine as a machine gun-toting terrorist, having her college thesis combed for grammatical errors or being the subject of a variety of unsubstantiated rumors, her desperate enemies futilely predicted that she would be the cause of her husband's undoing.

Underreported by the mainstream media was the reaction of black women to this mistreatment of Michelle. ’We were incensed when she was accused of being un-American,’ admit Barbara A. Seals Nevergold and Peggy Brooks-Bertram, co-editors of Go, Tell Michelle. To them, the New Yorker cartoon was the final straw. ’Black women everywhere felt the sting of indignation, decried this caricature, and rushed to embrace this and defend this beautiful, graceful, intelligent woman.’

And in the wake of the election, they immediately started soliciting other African-American females, ’Uncrowned Queens,’ for open letters of support for the incoming First Lady as a way ’to send her a special message, grounded in our common ancestry and in the belief that our daughters have not only been inspired by her accomplishments but empowered by her example.’

The upshot of those efforts is a quite evocative collage of heartfelt correspondence in poetry and prose ranging from the intimate to the light and lyrical. Among the hundred contributors are not only professors and professional writers but accomplished women from all over the U.S., Africa and the Caribbean, and representing virtually every walk of life, including teachers, students, a psychiatrist, a nurse, a violinist, a vocalist, an entrepreneur, a dancer, a genealogist, a social worker, a consultant and a country club president, to name a few.

I was particularly moved by the simplicity of the entry by Shirley Hanshaw of Mississippi who shares her favorite recipe for Pecan Pie. ’I know that you and Barack are not Southern,’ she starts, ’nevertheless, I thought you might enjoy this dessert. It is always a hit wherever I take it.’ Shirley goes on to let Michelle know that ’I have been praying for the safety of your husband and your entire family ever since his candidacy [and] I will continue to pray that God will surround all of you with a hedge of protection.’

An impressive compendium of eloquent messages which together paint a touching tapestry reflecting the depth of sisters' emotional investment in our new First Lady.