Book Review: Barack Like Me: The Chocolate-Covered Truth (Touchstone Books) 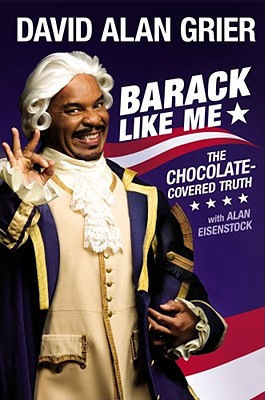 Read a Description of Barack Like Me: The Chocolate-Covered Truth (Touchstone Books)

"Ray Charles said the secret to life is timing. He was right on, especially when it comes to writing a book. When I handed in this book back in April 2009, Barack Obama was riding high and I was a happily married man. Now, it's more than six months later. Barack's approval ratings have fallen and so have mine.

Sadly, my wife and I are in the process of divorcing. Everything I wrote in Barack Like Me happened. Everything I said and felt was the truth. at the time."
’Excerpted from the Preface (page xi)

It's not a good sign when the author of a book is already making apologies in the preface for what you're about to read. That's what we have in the case of Barack Like Me by David Alan Grier, a disjointed rise of Obama memoir which might have sounded like a good idea a year ago, but which amounts to little more than the unfocused ramblings by a guy man who probably didn't have any reason to sound so giddy about Barack Obama or even about his own life.

This ill-conceived tome's problems start with the front cover photo, on which we find the author posed giving an "OK" hand signal while wearing a powdered wig and a patriot's uniform from the Revolutionary War Era. Based on the title's play on words, I supposed the picture is supposed to suggest that he's as patriotic as our new president.

Regardless, the content inside makes it clear that Grier had every intention of riding the wave of Obamania until it broke, given his gushing on page one about how "We won!" and how the first thing he does everyday (after kissing his wife) is to pinch himself to prove that it isn't just a dream that a black man won the historic election. In chapter two, he's still making an "hourly reality check" asking, "Barack Obama is still president, right?"

Despite the fact that Mr. Grier has an impressive pedigree including a degree from Yale and a Tony Award nomination, the sophomoric level of the political analysis here gets no deeper than, "Barack is president. Black is in. Black is cool. Everybody wants to be black now. But Obama black. Tiger Woods black. Halle Berry black. Not Samuel L. Jackson black. Or OJ black. Or Mike Tyson black." Yet, in the very next chapter, he talks abut attending the inauguration and how Samuel L. Jackson was invited to the White House for breakfast.

Granted, he's ostensibly attempting to be funny, and who knows to what extent his ghost write Alan Eisenstock deserves the blame for this fiasco. Sorry, I simply can't in good conscience recommend such stream of conscious drivel especially when the author's idyllic marriage has just fallen apart and the utopian Age of Obama he envisions hasn't materialized.

A transparent take-the-money-and-run rip-off of no substance designed simply to cash-in on the new president's popularity. The most out of touch offering since Shelby Steele's pre-election opus explaining why Obama couldn't win.

Read Touchstone’s description of Barack Like Me: The Chocolate-Covered Truth (Touchstone Books).