Book Review: The Rise: Creativity, The Gift Of Failure, And The Search For Mastery 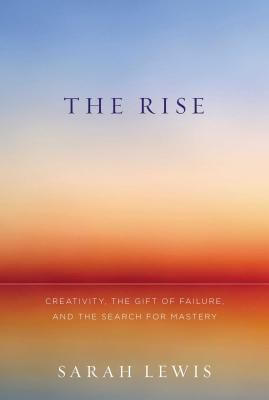 Read a Description of The Rise: Creativity, The Gift Of Failure, And The Search For Mastery

“This book is about the advantages that come from the improbable ground of creative endeavor. Brilliant inventions and human feats that have come from labor—an endeavor that offers the world a gift from the maker’s soul—involve a path aided by the possibility of setbacks and the inestimable gains that experience can provideģ

It is an exploration an atlas of stories about our human capacity, a narrative-driven investigation of facts we sensed long before science confirmed themģ It is the creative process—what drives invention, discovery, and culture—that reminds us of how to nimbly convert so-called failure into an irreplaceable advantage. ”
—Excerpted from the Introduction (pages 11-13)

I flunked out of high school before recovering sufficiently to not only get a diploma but to subsequently earn degrees from three different Ivy League institutions and a top law school to boot. I rarely ever mention that speed bump I hit in the 9th grade, since I think of it as an embarrassing blemish on an otherwise-stellar academic record.

But I suspect that Sarah Lewis would have me celebrate that temporary setback as a necessary step on the road to success. For, she sees failure as a much-maligned blessing, given how many of humanity’s greatest achievements “from Nobel Prize-winning discoveries to entrepreneurial inventions and works in the arts” followed initial attempts that fell short of the mark.

Lewis, a faculty member of Yale University’s School of Art, makes a convincing case for her theory in The Rise: Creativity, the Gift of Failure, and the Search for Mastery. She supports her iconoclastic theory with a profusion of proverbs and anecdotal evidence about prominent figures who managed to surmount setbacks, such as slave-turned-statesman Frederick Douglass, fledgling artist-turned-gritty inventor Samuel F.B. Morse and welfare recipient-turned-best selling author J.K. Rowling.

On the opening page, Professor Lewis recounts this sage insight on the subject by the late Maya Angelou: “We may encounter many defeats—maybe it’s imperative that we encounter the defeats—but we are much stronger than we appear to be and maybe much better than we allow ourselves to be.” The author also quotes Abraham Lincoln’s assertion that we “are ruined by this one sided practice of concealment of blunders and failures.”

The idea of ‘fessing up about ones foibles sounds sort of counterintuitive to this critic, given that we now live in an age when careers are routinely ruined by a mere slip of the tweet or the tongue. Sadly, society puts pressure on individuals to present themselves as squeaky clean and picture perfect from the cradle to the grave, since the slightest sophomoric post on Facebook, Instagram or elsewhere on the internet is supposedly certain to haunt you for the rest of your days.

Nevertheless, The Rise represents a contrary tribute to the indomitability of the human spirit which encourages all to freely acknowledge flaws revealed by their passionate pursuit of perfection.


Read Simon & Schuster’s description of The Rise: Creativity, The Gift Of Failure, And The Search For Mastery.