Book Review: Blacklash: How Obama and the Liberal Left Are Driving Americans to the Government Plantation 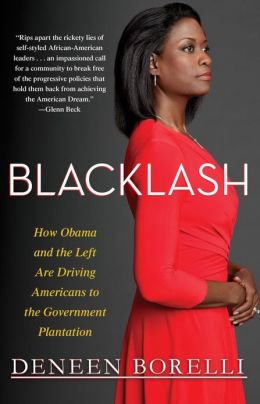 Read a Description of Blacklash: How Obama and the Liberal Left Are Driving Americans to the Government Plantation

I also don’t like the way some of the old-school black leaders have created and perpetuated a message of victimization among their black constituents… almost everything I was exposed to growing up was wrong... Reverend Sharpton’s and Jackson’s messages of bias, prejudice, victimization, and the need for special treatment…”
—Excerpted from the Introduction

Deneen Borelli is an African-American conservative whose message of limited government has made her very popular with the Tea Party movement. Lately, she’s been a frequent guest on such Fox News Network shows as Fox & Friends, Geraldo Rivera, Sean Hannity and Neil Cavuto, to name a few.

Ms. Borelli apparently has a number of bones to pick with the black community, starting with taking President Obama to task for “turning America into a welfare nation.” A big hint that she might have an anti-Obama agenda is the fact that she placed a blurb from TV host Glenn Beck on the front cover of her new book, Blacklash.

Yes, that’s the same Glenn Beck who once unapologetically referred to the president as a “racist… with a deep-seated hatred for white people.” Deliberate polarization appears to be an approach which resonates with Ms. Borelli, who begins by quoting some of the hateful tweets and emails which have been directed her way.

While the vile comments she picked to reprint certainly were uncalled for, I am sure she’s also received plenty of other letters criticizing her political point-of-view without ever resorting to cursing or slurs. Even I have occasionally been the butt of snarky remarks which went way over the line, but I prefer to dismiss such attacks as the rants of the lunatic fringe rather than give them any credibility.

By contrast, for some reason, Ms. Borelli sees a need to inform her readers on page 1 that she’s been called a “Tea-bagging [N-word]” and a “white [B-word] and worse. I guess that’s supposed to generate sympathy.

However, it struck me as a transparent attempt to play the victim, which is ironic because she is particularly fond of excoriating black folks for having a victim mentality that keeps them stuck on the “government plantation.” With incendiary chapter headings like “How Black Leaders Fail Us” and “The NAACP as Liberal Front Group,” Blacklash is otherwise basically a boring rehash of right-wing Republican talking points.

Besides Obama and blacks in general, Ms. Borelli takes potshots at many advocates of African-American causes: Congresswoman Maxine Waters, Reverend Al Sharpton, Reverend Jesse Jackson, even the First Lady. The only thing that makes the book unique is the fact that jaw-dropping assertions like “Welfare is an incentive for women to keep pumping out babies” in this case happen to be coming from the lips of an African-American female.

All I ask of my readers is that you keep any feedback you have for the author of Blacklash civil, however misguided the self-hating sister might be.

Read Threshold Editions’s description of Blacklash: How Obama and the Liberal Left Are Driving Americans to the Government Plantation.