Book Review: Who Owns The Future? 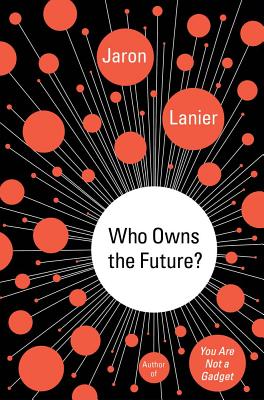 Read a Description of Who Owns The Future?

“The rise of digital networks led our economy into recession and decimated the middle class. Now, as technology flattens more and more industries—from media to medicine to manufacturing—we are facing even greater challenges to employment and personal wealth.

But there is an alternative to allowing technology to own our future. In this ambitious and deeply humane book, [Jaron] Lanier charts the path toward a new information economy that will stabilize the middle class and allow it to grow.” —Excerpted from the inside dust jacket

How do you explain the nagging, unusually-high unemployment rate in the United States? Is it merely that millions of manufacturing and white-collar positions have been outsourced overseas, or might there be another explanation? According to author Jaron Lanier, automation is a big part of the problem.

He points out, for example that Kodak, which once employed 145,000 people, went bankrupt and has ostensibly been replaced by Instagram, a billion-dollar company with an operating staff of just 13. He argues that “technology is making jobs obsolete—but not replacing them,” a trend which does not bode well for humanity’s prospects.

We would do well to heed the words of this sage visionary, a Renaissance Man in the truest sense of the term. For besides being a philosopher, he’s a musician, composer and, perhaps most notably for these purposes, the computer scientist credited with coining the term “Virtual Reality” back in the Eighties.

As an architect of the internet, Lanier co-created start-ups now better known as Oracle, Adobe and Google, accomplishments for which he was named one of the 100 Most Influential People in the World by Time Magazine in 2010.

But like a latter-day Dr. Frankenstein, he has come to regret how the fruits of his and fellow innovators’ labors have been appropriated by corporate America in a way which is making most of us extinct.

In this groundbreaking book, Lanier describes in detail how digital networks like Google and Facebook are destroying the middle class while simultaneously concentrating wealth and power in the hands of a few. Furthermore, he lays out a viable blueprint for reversing that frightening trend, a solution revolving around the novel notion that everyone deserves to be compensated with royalties for sharing their personal information online.

After all, “the value of companies like Instagram and Facebook comes… from the millions of unpaid users who contribute their… creativity to them.” Food for thought, for the next time you tune in to the latest Youtube sensation generating millions of hits for nothing more than 15 minutes of fame. 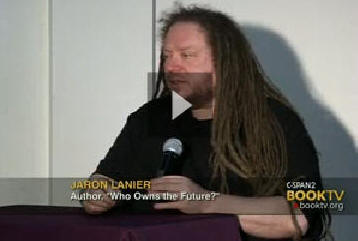 Jaron Lanier talked about his book, Who Owns the Future, in which he argues that the rise of digital networks contributed to our economic recession and weakened our middle class. He said that while many millions of people contribute to and create value for the internet, largely for free, the technology companies that own the central computers are the ones making all the money from it. In his book, he argues that a more equitable sharing of the wealth, based on user contributions, would improve the middle class and our economy. Mr. Lanier spoke at Kepler’s Books in Menlo Park, California.

Read Simon & Schuster’s description of Who Owns The Future?.