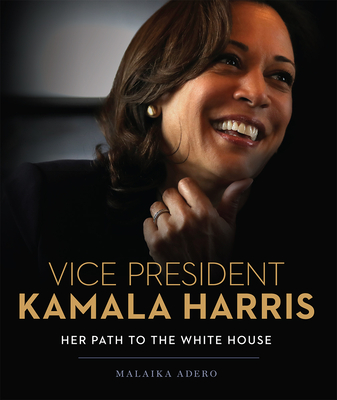 Read a Description of Vice President Kamala Harris: Her Path to the White House

America has a love-hate relationship with pioneers, the people who break impossible barriers to forge a successful life. Kamala Devi Harris, who was sworn in as 49th Vice President of the U.S. on January 20, 2021, is a member of this remarkable club. Editor-writer Malaika Adero, a legend in the publishing industry for more than 30 years with stints at Simon & Schuster and Amistad Press, puts together a stylish collection of text and image to pay tribute to this politician, who is the first woman to serve in the second-in-command, the first Black and South Asian – Caribbean American Female to occupy that office. The coffee-table book of this high achiever, Vice President Kamala Harris: Her Path To The White House, is more than the usual scrapbook of her triumphs.

With 120 glossy photographs and an assortment of colorful quotes, Adero zooms in on the true calling of Harris’ philosophy as a woman and a groundbreaking politician. “Women in the American sea of social change have been like water, necessary and appreciated within limits, but often disrespected and taken for granted,” she writes. “They gather, move, and grow over time and distance, with steps forward and steps back, rarely equated with power until they crash into the status quo so dramatically that the landscape they wash over bears little resemblance to what was there before.”

In her victory speech, Harris remarked: “While I may be the first woman in this office, I will not be the last.”

Any reader will see candid photos of Harris in a wide array of emotions and situations: the serious Harris; the reflective Harris; the warm Harris; the funny Harris; and the glamorous Harris. Often, they feature her welcoming, trademark smile. The photos accompany her California childhood with her talented parents, educator - cancer researcher Shyamala Gopalan and economic adviser - Stanford University economic professor Donald Harris. Harris describes her parents in the cross-cultural union between India and Jamaica, as “big thinkers, pushing big ideas, organizing the community.” She was sent to local Montessori school, later bused from her neighborhood to a white school.

Her mother soon accepted a teaching post and research position in Montreal at McGill University and the Jewish General Hospital. They spent five years in Canada until Kamala’s high school graduation in 1981, eventually returning to the Bay area. Harris decided to become a lawyer, with her civil rights heroes: Thurgood Marshall, Charles Hamilton Houston, and Constance Baker Motley. She enrolled at Howard University, the oldest of the HBCUs (Historically Black Colleges and Universities), noting that it was Justice Marshall’s alma mater. She pledged the Alpha Kappa Alpha (AKA) sorority. After graduating with a Bachelor of Arts degree in political science and economics in 1981, she enrolled in the University of California’s Hastings College of the Law.

Harris excelled in her studies, landing an internship at the Almeda County, District Attorney’ office, leading to her first job for the eight years as a deputy district attorney prosecuting sexual assault cases, homicides, and robberies. She joined the San Francisco district attorney office, eventually becoming head of its Division of Children and Families. In 2010, she ran for California’s Attorney General, winning by a margin of less than one percent. She was reelected to a second term four years later.

The death of her mother, Shyamala, from colon cancer in February 11, 2009, at age 70 makes a turning point in her life. “She was the most important influence in my life,” she said. Then another milestone was when she met Doug Emhoff, an attorney and a divorced father of a grown son and daughter, in 2013. She was single and in her forties. They married that next year.

When Barbara Boxer retired at the end of her fourth term as a U.S. senator, Harris announced her run for that post, later winning more than 60% of the vote. She became the second Black woman elected to the US Senate, following Carol Moseley Braun of Illinois in 1993. Harris served as senator in the 115th and 116th Congress during the final weeks of the Obama term and throughout Trump’s reign.

“When you break through a glass ceiling, you’re going to get cut,” Harris remarked, noting she is a fine example for young girls and women of the Black and Brown community.

“What I want young women and girls to know is: You are powerful and your voice matters,” the vice president said. “You’re going to walk into many rooms in your life and career where you may be the only one who looks like you or who has had the experience you’ve had…so you use that voice and be strong.”

Now, President Joe Biden has tapped her for a very complex, complicated role, just a heartbeat from the Oval Office. This is a critical time in American politics, taking the transfer of power just two weeks after the failed Trump coup on January 6, 2021. The Right-Wing media continually assail Harris for her low poll numbers, the prominent departures of her staff, and her supposed lack of leadership and management skills. A true political veteran, Harris lets the criticism roll off her back.

As Harris commented in her victory speech, her political resolve remains intact: “Because now is the real work. The hard work. The necessary work. The good work…To unite our country and heal the soul of our nation…The road ahead will not be easy. But America is ready. And so is Joe and I…”

It’s no wonder why Adero’s tribute to this political pioneer fills the bill for many observers of the American political scene. We are introduced to a truly compelling leader who has survived and thrived through an extended period of crisis and challenges. As we leaf through these precious pages, we realize integrity, commitment, and determination has its value and now it is in a completely attractive package.