Book Review: Soul Food: The Surprising Story Of An American Cuisine, One Plate At A Time 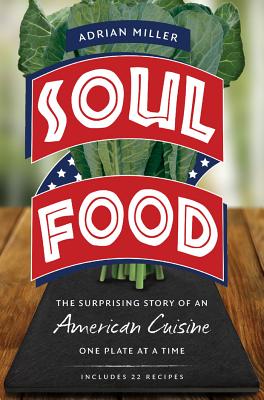 “From frontier cabins to plantation houses to the White House, from steamboat galleys and Pullman kitchens to public barbecues and fish fries and private homes without number, black chefs and cooks and servants have elevated the art of American cookery and distinguished themselves in the process, and they and all other Americans need to see the story fully told…

This is the story of soul food. Down through history, African-American cuisine has gone by several names since enslaved West Africans arrived in British North America: slave food, the master’s leftovers, southern food, country cooking, home cooking, down home cooking…

In recent years, soul food has gotten a bad rap, basically because many folks have come to think of it as unhealthy. Some have even gone so far as to indict it as the leading cause of chronic diseases and early death among African-American men over 40.

But Adrian Miller would be more inclined to blame it on a shift in the black diet’s away from traditional cuisine in favor of processed and fast food. Miller, a certified barbecue judge from Denver, Colorado, does concede, however, that soul food dishes were originally higher in sugar and fat than their southern food counterparts, since these ingredients were needed to spice up what were the master’s leftovers which were generally starchier, blander and bonier.

In this highly-informative opus, the author not only relates the history of soul food in intimate fashion, one plate at a time, but he includes 22 recipes for such scrumptious staples as Macaroni and Cheese, Catfish Curry, Deep-Fried Chitlins, Fried Chicken, Cornbread, Candied Yams, Black-Eyed Peas, Banana Pudding and Peach Crisp.

The book is filled with fascinating factoids. For instance, in a chapter entitled, “Chitlins: A Love Story,” we learn that pig intestines were once a delicacy appreciated as much by masters as by slaves. When Confederate General Joseph Wheeler’s cavalry stopped at a plantation in search of sustenance, his men devoured the chitlins offered so quickly that he didn’t get a bite.

A chapter playfully called, “Sometimes I feel Like Motherless Greens,” discusses the differences among the dozen of leafy plants regularly found on the dinner tables of down home chefs, such as cabbage, collards, kale, watercress, lettuce, dandelion, and turnip and beet greens, to name a few.

By book’s end, it is obvious that the author is concerned that his favorite culinary fare might soon become extinct. Thus, it’s no surprise when he chooses to close his heartfelt homage with the impassioned conviction that despite the changing times, “Soul food can keep its flavor without losing its soul.” 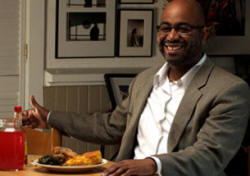 Reciepe from the book Copyright © 2013 by Adrian Miller. Used by permission of the University of North Carolina Press (www.uncpress.unc.edu).

This is my favorite thing to make in the soul food genre. I didn’t grow up eating collards. My mother usually made a combination of mustard and turnip greens. Turnip greens seemed to be the popular option for greens as I traveled through Tennessee. I love the peppery aroma that mustard greens give off while they’re cooking. I’ve lately been using smoked turkey parts to season my greens because they give good flavor with less fat. Yet, every once in a while, I go retro and put on a pot of greens with some ham hocks.

Read The University of North Carolina Press’s description of Soul Food: The Surprising Story Of An American Cuisine, One Plate At A Time.