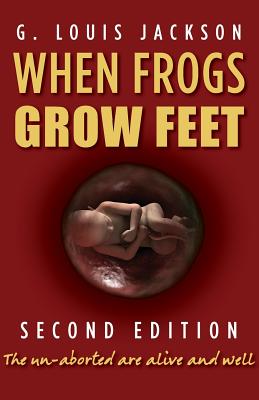 Read a Description of When Frogs Grow Feet

While When Frogs Grow Feet’s blurb links its juicy contents to Henry Miller’s classic wanton tale, Tropic of Cancer, the only literary connection between the pair is its high libido and the hearty sexual appetite of its characters. Its author, G. Louis Jackson, uses the convoluted social backdrop of the rambunctious behavior of Godiva Jones, an “Un-aborted baby” or UAB, to play out the psychological and sexual mating dance between Malcolm George, a 43-year-old divorced probation officer and Vanessa Holmes, a local owner of several high-end boutique shops. That dance takes on many forms, including a battle of wills and a carnal courtship that sends sparks flying off the pages of this ambitious novel.

The book opens with Godiva, an unruly 15-year-old waif on probation for a series of petty crimes, escaping from the window of the women’s bathroom at the Washtenow County Juvenile Court. She immediately reteams with her sidekicks, David, a raunchy Jewish kid, and Saigon, a thin Vietnamese urchin to raise hell. With choice commentary on economic wasteland of Detroit, once the pride of the Midwest boom and home of America’s automotive industry, Jackson gives the reader a candid survey of the city as this trio try to evade the law. He writes about the depth of the city’s money struggles and its hopes when he spotlights a billboard reading: “Something To Get Excited About Right Here In Detroit.”

Malcolm, a five-year veteran of the probation department for the State of Michigan, has his hands full with Godiva, who has been kicked out of the Angels of Mercy Home and labeled incorrigible. After her escape from the courthouse, she dodges detection until she is pursued onto an expressway and struck by a car. Malcolm visits her every day while keeping up his membership duties in The Brotherhood of Steele Pandas, an organization based on traditional masculine concepts. While the story is told from Malcolm’s “masculinist” viewpoint, Jackson does a fine juggling act with each of the main characters, Godiva and Vanessa, having their say. Malcolm has to come to terms with the emotional force of these females, one young and one older, and his relationships with both of them plugs the gaps in his socialization of a modern age where women want to control their own lives.

Although Jackson is very descriptive in his use of dialogue, detail, and drama, he is very careful to create a male character full of opinions, doubts, fears, and strengths. He does that as well with Vanessa, a clever, commanding woman with a sexual hunger equal to his own. The author’s words are often insightful and revealing: “They say the only thing that can exist between two people is a relationship. But people and their relationships are not always what they seem to be, and what goes on between two consenting adults would be of such a shock.” (pg. 223)

When Godiva is again in Wayne County Juvenile Detention Facility, the judge puts full responsibility on Malcolm to see that she stays out of trouble. He assumes the role of a surrogate patent, even bringing her into his life. Vanessa, intrigued with the troubled girl, insists he bring the girl to meet her. He arranges with her social worker to take her to the Family Day celebration at his men’s organization.

In the end, the journeys of Malcolm, Vanessa, and Godiva merge and become intriguingly rich, but the author can lay it on thick at times with his observations about masculinity, sexuality, female empowerment, abortion, and intimacy. Yet, it’s a clever, wise, and timely fictional measure of our contemporary times.