Book Review: Why Every Black Woman Should Marry A Jewish Man: A Book For All Women Looking For The Perfect "Alpha" Male 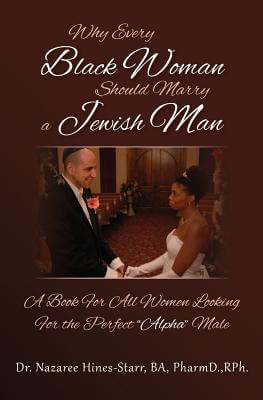 Read a Description of Why Every Black Woman Should Marry A Jewish Man: A Book For All Women Looking For The Perfect "Alpha" Male

“How many times have we heard successful African-American women complain they can’t find a good man? Everyone has an opinion on the black man shortage, but none of the so-called relationship experts offer real solutions…

Is it possible that we have been missing an important match? Yes! Jewish men make wonderful husbands… as well as fantastic lovers. This book… sheds light on why successful black women, and career gals in general, and Jewish men are very compatible…

In summary, to find Mr. Right, women must date with quality in mind, such as character traits and values, they should be open to interracial dating, and apply faith in dating.”
—Excerpted from the Introduction (pages xiii-xiv)

Sometimes, a sister has to kiss a lot of frogs before finding her soul mate. In Dr. Nazaree Hines-Starr’s case, she had to date a lot of “scumbags,” as she puts it. As a black woman, she had trouble meeting single guys who were at her level “emotionally, academically or professionally. Unfortunately, most of the available African-American men she met “had managed to waste years that should have been spent in college or developing a career, chasing skirts, getting arrested, or playing video games.”

Moreover, many had “accumulated baggage” such as “rap sheets” and “baby-mama drama.” And even the rare brother who had his act together was never serious about settling down and starting a family.

So, rather than lower her standards by entertaining the advances of commitment-phobic losers from a lower socioeconomic class, Nazaree decided to expand her pool of potential suitors to include men who might not be Christian or African-American.

Lo and behold, she met her future husband over the internet at an online dating website. Although Michael was white and Jewish, love blossomed across the color and religion lines, and the couple has since married and even been blessed with the birth of a beautiful baby boy, Hayden.

Nazaree chronicles her perils in the battle-of-the-sexes and exactly how she emerged victorious with the perfect alpha male on her arm in Why Every Black Woman Should Marry a Jewish Man. The author, a gifted writer but a pharmacist by trade, is surprisingly forthcoming in her combination memoir/how-to tome whose title pretty much speaks for itself. 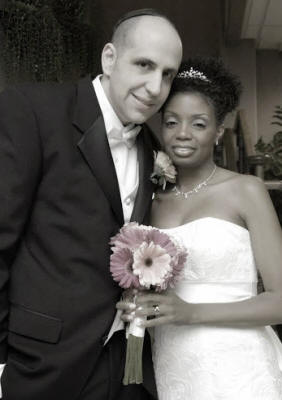 Beginning with Chapter One, “Scumbag Files,” she takes delight in delineating the lessons she learned from a string of dates from hell. By Chapter Eight she’s done with dishing the dirt and is ready to extol the virtues of taking a dip in the snow, so to speak, meaning entering a relationship with a proverbial good Jewish boy.

Why? First of all, you don’t have to worry that he might be on the down-low, because Jewish culture isn’t homophobic. Secondly, Jewish men generally graduate from college, and they aren’t looking for someone to support them.

Furthermore, they “marry BEFORE making babies,” and “they don’t display their underwear in public.” Plus, they’re practical financially and don’t have a need to preen in macho fashion. And last but not least, they know how to please a partner in bed.

A proven approach for open-minded sisters in search of their Prince Charming.

Read CreateSpace’s description of Why Every Black Woman Should Marry A Jewish Man: A Book For All Women Looking For The Perfect "Alpha" Male.