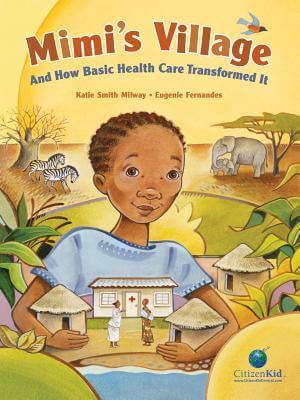 Read a Description of Mimi’s Village: And How Basic Health Care Transformed It (Citizenkid)

“Mimi’s fictional village is like thousands of real villages in the developing world, where health care, especially among infants and children, is poor or uneven. As a result, every day, 21,000 children under the age of five die, most of them from diseases that could have been prevented with basic health care.

Mimi’s Village is ultimately a story of hope and a vision of a better future. It shows how people working together can make changes for the better, and it gives young readers tools to help them improve the health of villages half a world away.”
—Excerpted from the Introduction

When I was growing up, my well-meaning parents often relied on the mantra “Don’t you know there are children starving in Africa!” to get me to finish my dinner. But I’m not sure whether that message or my relatively-privileged quality of life ever really registered. All I knew was that I was expected to clean my plate before I’d be allowed to proceed on to my favorite course, dessert.

Too bad my frustrated folks didn’t have a companion tool like Mimi’s Village at their disposal back then. For this entertaining and informative picture book would undoubtedly have captured my imagination while simultaneously helping me understand the deeper message they were desperately trying to convey.

Written by Katie Smith Milway and delightfully illustrated by Eugenie Fernandes, the story is set in rural Kenya where it revolves around a cute little girl with cornrows called Mimi Malaho. As the tale unfolds, we find the women of her village weeping and eating from a common bowl as they mourn the passing the previous night of a baby named Kanzi.

The death concerns Mimi, since her mother is pregnant. After all, their country has a high rate of infant mortality as a result of combination of poor sanitation, malnutrition, contaminated drinking water, disease-carrying mosquitoes, a need for vaccinations and more.

The narrative proceeds to delineate each of the aforementioned dangers before discussing some simple solutions, such as inoculations, sleeping under netting and boiling water. Plus, after the optimistic ending, the author shows where you can send donations, and exactly what that money will do. For example, $18 buys three bed nets and just $8 can save a hundred kids from dehydration.

An inspirational opus likely to inspire any spoiled-rotten, little monsters to appreciate that they have a lot to be thankful for and maybe even motivate them to minister to the needs of the least of their brethren.

Read Kids Can Press’s description of Mimi’s Village: And How Basic Health Care Transformed It (Citizenkid).