Book Review: Wellington Webb: The Man, The Mayor, And The Making Of Modern Denver 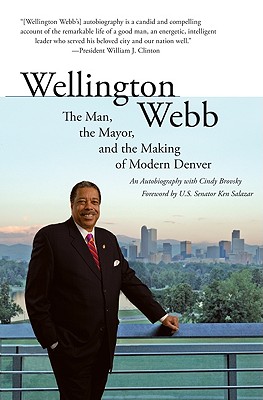 Read a Description of Wellington Webb: The Man, The Mayor, And The Making Of Modern Denver

’I arrived in the Mile High City in 1953 as a sickly, 100-pound, 12 year-old with asthma. Denver had a small, tight-knit black community that comprised 11 percent of the population. So, not only were the odds against me in terms of growing from a skinny kid into a healthy adult, but also in terms of being African-American’ in a mayoral [race].

I was the underdog in the campaign’ and I ignored the advice of longtime friends to quit the race. Instead, I took my campaign to Denver's streets and walked more than 300 miles citywide. I slept in the homes of more than 40 city residents' and I brought my own army cot to a homeless shelter when I stopped there one night.

My first act as mayor in 1991 was to convene a Downtown Summit to map out a plan to revitalize the core of our city’ During my dozen years as mayor, Denver went from being perceived as a cow town to being in the worldwide spotlight.’

Wellington E. Webb became Denver's first African-American mayor after mounting a novel ’Sneaker Campaign’ in which he beat a popular incumbent by walking door-to-door and individually introducing himself personally to thousands of his potential constituents. Not only did this relative unknown ultimately prevail, but he went on to serve the city for 12 years. In Wellington Webb: The Man, the Mayor, and the Making of Modern Denver, the popular Democrat recounts his administration's considerable accomplishments including the opening of Denver International Airport and the development of the Central Platte River Valley into a thriving community.

This uplifting autobiography opens with Webb sharing his genealogy, tracing his ancestors' roots back to Alabama, Mississippi and Louisiana with the help of his maternal grandmother, Helen. Wellington himself was born in Chicago in 1941 to Wellington Webb, Sr. and Mardina Williams, who had met there on a blind date. His dad was a porter with the railroad while his mom was a housewife. However, their union was not to last, and Wellington was shipped off to Denver to be raised by his grandmother, as much because of his asthma as on account of his parents' deteriorating relationship.

After delineating the Webb family tree, the bulk of the book is devoted to a warts-and-all look at Wellington's career, and these political feats are interspersed with a lifetime's worth of intimate reflections. An inspiring memoir by a revered role model who overcame everything from asthma to racism to prostate cancer and who continues to make significant cultural contributions to this day.

Read Fulcrum Publishing’s description of Wellington Webb: The Man, The Mayor, And The Making Of Modern Denver.