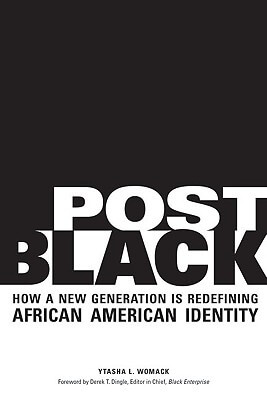 Read a Description of Post Black: How A New Generation Is Redefining African American Identity

"In this book, I will not detail every pathological condition that ever existed in African-American life. You won't read about the endangered black male, the destruction of the black family, or the welfare queen. It is not a diatribe on the proliferation of drug kingpins, crack addicts, gang violence, or unemployment in the inner cities. Nor is it a bashing of the single mother, a study of the absentee father, or a condemnation of troubled youth…

This book is not about the dearth of good black men… It is not a waxing nostalgic about the mythical days when real community values ruled and everyne marched to the beat of freedom. Nor is this a sentimental dedication to the thrills of thug life...

Post Black opens with the most evocative and entertaining "will not"
disclaimer since The Last Poets' rhythmical rant in "The Revolution Will Not Be Televised" delineated a laundry list of what the impending black insurrection would not involve.
Apparently, that coup d'etat must have long since transpired, since author Ytasha Womack now addresses not the mainstream concerns of the oppressed black masses, but those of a diversity of lesser-acknowledged slices of African-Americana, like African and Caribbean immigrants, Buppies (Black Urban Professionals), black gays and lesbians, black transgendered individuals, the biracial community, black bi-culturals, African-American feminists, the Talented Tenth and black Buddhists.

As she explains it, "Post Black is about emerging groups, both vibrant and forceful, whose voices and issues are entrenched in communities but are not part of the social agenda, public discussion, national politics, or collective identity." Ms. Womack's salient point is that African-Americans are long past the point of comprising one monolithic interest group. Excuse me for already feeling that way 50 years ago.

Nonetheless, the book is well-written and sensibly organized with chapters devoted to each of the aforementioned "new" constituencies. However, the author bases her conclusions about her assorted subjects more on anecdotal evidence and her own personal feelings than on any social scientific data or empirical research.

Thus, Post Black comes off as the naïve observations of a wide-eyed journalist who only recently woke up to the fact that there are black folks who are gay, or who have a white parent, or who are immigrants, or who are bourgie, or who are geniuses or who are just plain weird. I'm not sure that's news, unless you haven't been around African-Americans much. Growing up back in the day, you'd definitely get teased mercilessly about any idiosyncrasy. Consequently, I was burdened with the nickname "Kraut" because I must have looked like the closest thing you could find to a German in my ‘hood.

For better or worse, in these more enlightened, "Post Black" times, I suppose such myriad differences mean one might opt to identify more with a narrowly-defined interest group than with the greater African-American community. Let me know if there's an organization out there for black Krauts with no German ancestry.