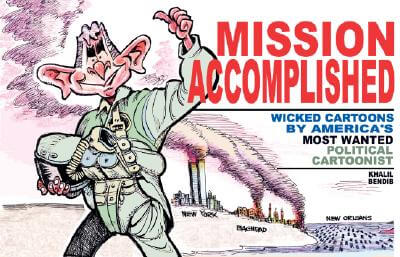 "Mission Accomplished is about point of view. The cartoons invert the U.S. media reality’ by focusing on disputes and debates in human terms. For the typical American, this book's point of view is a world turned upside down. The modern-day princes and potentates, the wealthy investors and powerful politicians, are stripped of their pretensions and placed in context of their effects on vast numbers of individual human beings.

Bendib's cartoons scramble a deck that has been stacked by the demagogues and crusaders who feel they must diminish the humanity of others to exalt their own. No wonder he can lay claim to being "America's most censored political cartoonist.’"
’Excerpted from the Foreword (p. vi) by Norman Solomon

Long gone are the times when our syndicated cartoonists could be relied upon to challenge the status quo in a thought-provoking fashion likely to shake the masses out of the doldrums. The reason for this unfortunate development is due to the fact that, by-and-large, the mainstream press is comprised of conglomerates who share the same interests as the corporations and politicians whose behavior deserve to be monitored and then satirized.

Consequently, the bulk of the cartoonists currently in circulation are ones who either approach issues from their employer's perspective or avoid controversial material entirely. This, for instance, helps explain how the country ended up mired in Iraq without ever seriously questioning the basis for the invasion. Similarly, it makes it easy to understand how FEMA's ineffective response in the wake of Hurricane Katrina could remain unquestioned for months on end.

Fortunately, Khalil Bendib is an exception to the rule and his work stands in sharp contrast to most of his colleagues. This inventive Muslim-American artist routinely weighs-in with clever, iconoclastic cartoons on subjects ranging from war profiteering to New Orleans to racism to healthcare to the criminal justice system to the Middle East.

Trademark Bendib can be found in his lampooning of the 2004 presidential election in Ohio as "separate but equal" with side-by-side tableaus in which votes are collected in ballot boxes in white precincts, but in trash cans in black neighborhoods. He returns to this theme frequently to illustrate the country's 21st Century form of segregation, such as his drawing of a hospital where a "Whites Only" sign has been replaced by one reading "Insured Only."

Just the sort of honest, hard-hitting cartoons called for in this Orwellian Age where doublespeak and disinformation have become the order of the day.