Book Review: Ashamed To Die: Silence, Denial, And The Aids Epidemic In The South 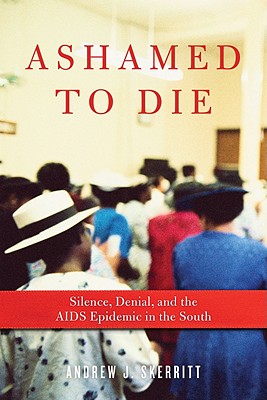 Read a Description of Ashamed To Die: Silence, Denial, And The Aids Epidemic In The South

"HIV/AIDS remains a significant public health and social justice crisis in the United States, and the South in particular is heavily burdened� Poverty, poor education, and limited community resources conspire against people who live in the rural South...

Even as America has dispatched billions to fight this disease overseas, our small rural communities remain vulnerable to the sinister threat of HIV/AIDS. The enemy isn't just the physical illness. It's ignorance; it's the guilt and shame-inducing silence that kills our young�

HIV/AIDS is more than a disease--it is a symptom of the larger problems of social inequalities and racial/ethnic health disparities. . .  It�s time to end the silence and to provoke an eruption of empathy, compassion and community action to alter the sad trajectory of AIDS in our small towns."
--Excerpted from Chapter One (page 11)

When the AIDS epidemic exploded about 30 years ago, it initially ravaged the gay community. But the number of homosexuals infected dropped dramatically due to a combination of safe sex education and medical breakthroughs.

Simultaneously, however, the AIDS rate among blacks has continued to skyrocket to the point where two-thirds of the new female cases in the country are African-American, meaning a sister is 15 times as likely to become HIV+ as a white woman. And these statistics are even worse in the South where eight of the states with the highest infection rates are located.

But Andrew Skerritt didn�t need help from the CDC to appreciate the toll the plague is taking on black folks in the region. For the London-born, professor of journalism at Florida A&M University could observe how such factors as denial, shame, racism and poverty had collaborated to prevent AIDS patients from receiving proper treatment.

In Ashamed to Die, he chronicles that societal failing as witnessed in the Clover, South Carolina, a typical tiny town where talk about AIDS is considered taboo. Consequently, many of the infected remain in denial and undiagnosed, especially since, "the health department couldn't force a person to be tested even if a contact gave them names of people exposed tom AIDS."

Nonetheless, symptoms of the lethal illness eventually do appear, as the body becomes susceptible to a variety of opportunistic infections. Sadly, the author found that "Caring for people with AIDS is the kind of thankless work few are willing or even equipped to do."

And in the case of Dr. Robert Ball, he ended up broke and "a pariah in his own community" when he was abandoned by his regular patients because he allowed those with AIDS to share the same waiting room and office. And not only did the 42 year-old physician eventually lose his practice, but his wife and his home, too.

Still, his plight pales in comparison to that of those dealing with the debilitating ailment on a day-to-day basis. "Those dying of AIDS long for comfort, someone to hold their hands," since "no one wants to die alone," Skerritt concludes.

Apparently, no one wants to die forgotten either. For, in fascinating fashion, he proceeds to put a face on the disease by devoting individual chapters to the life stories of several ill-fated patients and devoted caretakers.

A sobering manifesto practically begging African-Americans to acknowledge the omnipresence of an escalating plague decimating the community.


Read Chicago Review Press’s description of Ashamed To Die: Silence, Denial, And The Aids Epidemic In The South.