Book Review: A Thirst For Rain 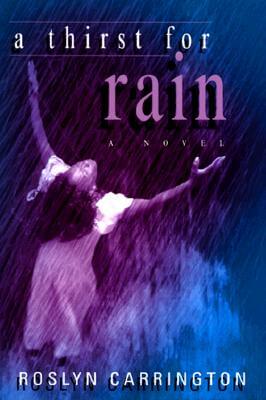 Read a Description of A Thirst For Rain

A Thirst For Rain is a multigenerational novel set in Trinidad. It is a tale about demons both real and perceived, and how deceptively simple it is to overcome them.

Myra is a single mother who is struggling to rise above her impoverished lifestyle. An entrepreneur who sells hot, homemade lunches to local workers, she is savvy at organizing and maintaining her career. When it comes to her love life, however, common sense is ignored as she continues her on-and-off relationship with Slim, a self-proclaimed hustler with a low opinion of women. She carries the shame and humiliation of her relationship inside; unbeknownst to her, she is being admired from afar by Jacob, a once-famous stickfighter who was injured and is now licking his own wounds while eking out a living as a leather repairman. Myra is also trying to raise a headstrong, beautiful and brilliant teenage daughter, Odile, and take care of her senile father, Sebastian. Her day-to-day juggling act leaves her confused, frustrated, and wishing for a strong shoulder to cry on.

Myra and Jacob's hesitant relationship is paralleled by that of Odile and Rory, the abused son of an alcoholic who lives next door. Rory worships the ground that Odile walks on; Odile, in typical older-girl fashion, ignores him as long as she can. Both relationships are slow to ignite, but end up in a conflagration as bright and hot as the drought that has plagued Trinidad for months. Seduced by the warmth and illumination, all of the characters are blind to the tentative boundaries of the world in which this fire resides. When the inflammation looms out of control and threatens to destroy everything that the characters have ever known, they all pull together to salvage a life out of the ashes. It is only after the rains come that they are able to take what they have saved and start clean.

Ms. Carrington's debut novel is colorful and relevant to today's society. Her characters are rather well-developed and leap off the page, to the point where they invoke feelings as if they were real people. It is easy to empathize with Rory, sympathize with Myra, pity Sebastian, understand Odile, admire Jacob and dislike Slim. I especially like the metaphorical use of rain. This natural resource has the power to delay, destroy, cleanse, and renew; Ms. Carrington uncovers all of these aspects in the lives of all of her characters. This is more obvious in the lives of Myra and Jacob, as both must take the fragments of their former lives and put them together in a new way, both for their separate and joint lives.

Her writing style is the most impressive thing about this book. It is descriptive enough to truly evoke and envision her native Trinidad to readers. This is an attractive quality, particularly for those readers that have never visited that country. Definitely impressive for a first-time novel. I look forward to reading her future works.

Read Kensington’s description of A Thirst For Rain.