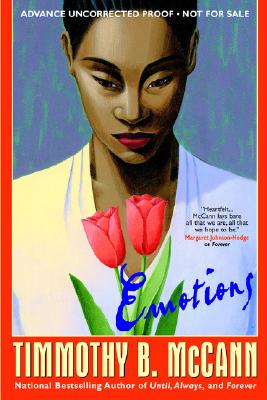 by Timmothy B. McCann

Read a Description of Emotions

Emotions certainly contained a lot of them. Love, lust, jealousy, rage’Mr. McCann left no stone unturned in this novel about relationships between both the living and the dead.

Though this work was described as examining the relationship between Joi Weston and Phillip Evans, it actually seemed to treat their marriage as an afterthought. The focus seemed to be concentrated more on the relationship, or lack thereof, between Joi and Michael Brockmeier II, the child and namesake of a late literary genius.

I thoroughly enjoyed the complexity of Michael's character. Mr. McCann skillfully delved into the psyche of a "lucky sperm" that struggled to find his own identity. Michael's angst in the face of constant comparisons to his deceased author father was a powerful driving force behind this character. The decisions and deceptions that he made demonstrated Mr. McCann's gift for painting a tragically flawed, yet irresistibly human, character. I was especially pleased when Michael took over the rearing of his seven- year-old son in an effort to provide the child with stability. While the concept of paternal responsibility is on the rise in contemporary fiction, its portrayal is still few and far between; its appearance in this novel was refreshing and uplifting. Michael practically leapt off the page and caused me to excitedly read further.

The character of Joi Weston, however, left much to be desired. I found it difficult to connect with her. I don't know if this was because Mr. McCann is a male author attempting to accurately portray the thoughts of a female character; relatively few male authors can pull this off. She came off as two-dimensional, somewhat stereotypical, and dull. I only tolerated her presence as necessary, in order for Mr. McCann to further explore the nuances of Michael's character. The character was liveliest in the beginning of the book; I was disappointed when I saw the bland turn her character took in the rest of the book. I also was not pleased with Joi's brief encounter with her father. It seemed contrived and heavy-handed in its attempt to impart a moment of morality. Joi's husband, Phillip, was deceptively stereotypical; the seductive pull of his intricate personality did not surface until the latter part of the book. I would have liked to see his character developed more in the beginning, especially in regard to his late daughter, Angie. I also would have liked to see him more as a character. Mr. McCann also did a splendid job on displaying the relationship between Joi and her brother Joe.

While the overall story got off to a slow start, it did pick up the pace and progress rather evenly. The ending, however, seemed a bit too neat. Mr. McCann seemed to gloss over the moments when Michael's network of lies was exposed. Michael's epiphany and acceptance of his niche in this life was anticlimactic, as was the resolution of he and Joi's relationship. Likewise, Joi and Phillip's reconciliation was a bit too "kumbaayaa" for my tastes. I do applaud Mr. McCann for having Joi and Phillip actually work out the difficulties in their marriage instead of divorcing. That was a nice snub to the 50% divorce rate that is prevalent in today's society. All in all, this was an interesting read.