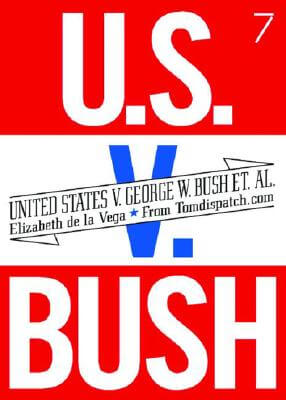 ’After analyzing the evidence in light of the applicable law, I've determined that we already have more than enough information to allow a reasonable person to conclude that the President conducted a wide-ranging effort to deceive the American people and Congress into supporting a war against Iraq. In other words, in legal terms, there is probable cause to believe that Bush, Cheney, Rumsfed, Rice, and Powell violated Title 18, U.S. Code sec. 371, which prohibits conspiracies to defraud the United States’

My goal is to send the message home to whomever will listen [that]:
The President has committed fraud.
It is a crime in the legal, not merely the colloquial, sense.
It is not a victimless crime.
We cannot shrug our shoulders and walk away.’

More than anything else, the 2006 mid-term election was a referendum on the war. And the American people delivered a clear mandate by delivering enough votes to shift control of both the Senate and the Houses of Representatives to the democrats. Yet, inexplicably, last November, well before the reconstructed Congress even had an opportunity to convene, Nancy Pelosi (D-CA), the new Speaker of the House, announced that there would be no impeachment hearings.

Unfortunately, this hands-off approach appears only to have emboldened the Bush Administration which has since proceeded to ignore the crystal clear message just sent by the electorate by increasing the number of troops stationed in Iraq by 20,000. Furthermore, it has also come to light that on December 7th, the White House ostensibly exerted undue influence on the Justice Department by having Attorney General Alberto Gonzales fire eight U.S. attorneys in a patently political, tactical maneuver.

Should the President have been impeached for having gotten the country into the war based on untruths? Were there sufficient legal grounds to do so? Fortunately, thanks to former assistant U.S. Attorney Elizabeth de la Vega, we have an excellent idea of exactly what the case might have looked like. In her book, U.S. v. Bush, Vega, relies upon her 20 years of experience as a federal prosecutor to stage the likely indictment of the President and his senior advisors which Pelosi had passed on.

As an attorney, I found the author's hypothetical grand jury scenario not only credible and compelling, but also enlightening and, ultimately, damning. So, if you're inclined to weigh all the evidence, don't be surprised to find yourself agreeing with the prosecutor that there's probable cause to believe that the Bush Administration actually deliberately deceived Congress and the rest of America.