Book Review: Michael Jackson: The Man behind the Mask 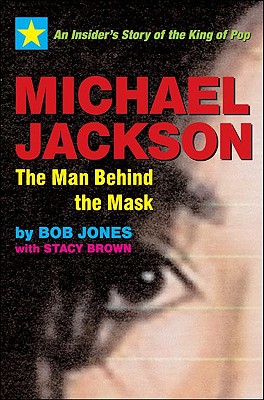 by Bob Jones and Stacy Brown

Read a Description of Michael Jackson: The Man behind the Mask

"As the 'Bad' tour moved to St. Louis, a 13 year-old boy named Peter joined the entourage. This kid had been with us in New York and was now coming along for the entire tour. The tabloids had a field day with their questions about the boy and his parents. One tabloid reported that Michael had purchased the kid by giving the parents a Rolls Royce.

At Paris' DeCrillon Hotel, Michael had drawn a picture of Peter and himself [on a bed sheet]. Also written on the sheet was what amounted to a love note to the boy. Worried that if a hotel housekeeper got a hold of the sheet, it could end up in the hands of the media or law enforcement, we had our secretary pack it, taking it with us. That was my first tangible clue that Michael Jackson, the King of Pop, was up to no good..."
’Excerpted from Chapter 3

If pop culture is the politics of the 21st Century, then Michael Jackson might be considered this emerging age's consummate politician. For politico wacko Jacko's lifestyle has remained the subject of our fascination regardless of how sick, sordid, or bizarre his behavior.

For instance, although he boasts about sleeping with boys, he still has millions of rabid fans who refuse to believe he is a pedophile. And they also never abandoned him after the radical blackendectomy and the series of elective surgeries which left him looking like one weird white woman.

In order to weather media storms successfully, any celebrity needs a good PR person who could carefully choreograph press and photo opportunities to their client's advantage. For over 34 years, Bob Jones was Michael Jackson's right-hand man. This brilliant publicist ran interference for his employer, always putting a good spin on whatever embarrassing predicament his boss found himself in, from being caught on camera canoodling with a boy, marrying Lisa Marie Presley as a publicity stunt, or writing anti-Semitic song lyrics.

Emerging from every escape unscathed, Michael must have come to see himself as a Teflon icon to whom no negative story could stick. So, for some dumb reason, he fired his dependable hatchet man, and without notice or any severance pay, despite the decades of loyal service. Jones was lucky he had never been asked to sign a confidentiality agreement, for hell hath no fury like an apologist scorned.

The upshot is the publication of the ultimate disgruntled employee's tell-all,, namely, Michael Jackson: The Man Behind the Mask. This book answers, once and for all, every question you've ever debated the self-proclaimed King of Pop. Like, does he suffer from self hatred? Yes.

Apparently, he refers to his own people as "Splaboos"and uses any "excuse for not going with a black candidate" when hiring an assistant.

Does he like girls? No. Does he like boys? Yes, and has reportedly threatened to kill himself if he could no longer sleep with them. It is fascinating to hear Jones recount just how plenty of parents of 8 to 12 year-olds were bribed with bling and Benjamins to allow Michael to take their sons away from them on extended trips during which he would spend long unchaperoned nights alone with each in hotel rooms while on tour.

Apparently, Jackson even has a kinky fascination with feces, saving soiled underwear as mementos.

The book never gets boring for a moment, with the author gleefully dishing behind-the-scenes dirt on everything from Michael's sham marriages, one for money, one to buy some babies who aren't even his, to his fear of flying to his playing the race card strategically to his personal hygiene and cosmetic habits. Still, the most compelling tales told here are the inside peak at his tender courtships of well-known child actors like Macaulay Culkin and Emmanuel Lewis.

Though Bob Jones never expressly says Michael Jackson is a pedophile, he paints enough of a picture that all any idiot has to do is connect the dots.

Read To Be Determined’s description of Michael Jackson: The Man behind the Mask.