Book Review: The Legacy Of Islamic Antisemitism: From Sacred Texts To Solemn History 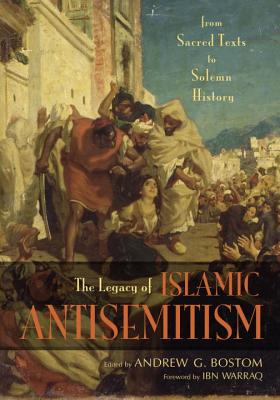 Read a Description of The Legacy Of Islamic Antisemitism: From Sacred Texts To Solemn History

’Is Islamic anti-Semitism only a modern phenomenon? During the last fifteen years, certain Western scholars have tried to argue that, first, Islamic anti-Semitism -- that is, hatred of Jews -- is only a recent phenomenon learned from the Nazis during and after the 1940s, and, second, that Jews lived safely under Muslim rule for centuries, especially during the Golden Age of Muslim Spain. Both assertions are unsupported by the evidence’

While the West has recognized its own shameful part in the slave trade and anti-Semitic persecution’ the Islamic lands remain in constant denial. Until Islamic countries acknowledge the realities of anti-Jewish persecution in their history, there is no hope of combating the continuing hatred of Jews in modern times.’ ’Excerpted from the Foreword (pages 21-25)

Does Muslim intolerance of Jews emanate from the creation of Israel 60 years ago, or is it merely the reflection of a deep-seated prejudice which is part and parcel of their religion? This is the question relentlessly addressed in The Legacy of Islamic Anti-Semitism: From Sacred Texts to Solemn History an exhaustive study undertaken by Andrew Bostom, MD.

His 768-page opus, the result of years of scholarly research into the subject, makes a persuasive argument that, while the animosity currently exhibited by Muslims toward Jews might have been further fueled by the Arab-Israeli conflict, such hatred is a motif which has been around since the inception of Islam. Bostom, a physician and professor of medicine at Brown University, is an expert on the Middle East and author of another best seller, The Legacy of Jihad: Islamic Holy War and the Fate of Non-Muslims.

This meticulously-annotated tome is comprised of entry after entry after entry of accounts of anti-Semitism culled from documents, journals, articles and even the Koran itself. Almost like a trial lawyer, Bostom builds his case simply by quoting from these historical sources, never editorializing, but just allowing the mounting evidence to speak for itself.

His aim, ostensibly, is to embarrass responsible members of the Muslim community into acknowledging this unfortunate aspect of their culture in the hope that initial steps will now be taken to eradicate an entrenched attitude accepting the widespread mistreatment of Jews. While Dr. Bostom might not want to hold his breath in that regard, he nonetheless deserves praise for having compiled a seminal treatise likely to enlighten intellectuals in search of the truth about anti-Semitism for generations to come.

Read Prometheus Books’s description of The Legacy Of Islamic Antisemitism: From Sacred Texts To Solemn History.