Book Review: Free Lunch: How the Wealthiest Americans Enrich Themselves at Government Expense (and Stick You with the Bill) 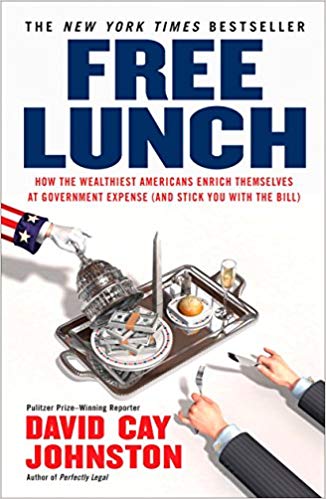 Read a Description of Free Lunch: How the Wealthiest Americans Enrich Themselves at Government Expense (and Stick You with the Bill)

’The evidence of a growing divide between the superrich and everyone else in America is so overwhelming that all but the few lightweight ideologues among economists acknowledge this harsh truth... A national debate has arisen over just what is going on

Why are the rich getting so much richer, while the middle class struggles and the poor fall behind? Why are the richest of the rich ’ billionaires ’ pulling away even from those whose net worth is in the many millions? Is education behind increasing inequality, as the White House says?

In the pages ahead we will examine just how thoroughly government has become the servant of the rich’ who owe their fortunes less to their enterprise than to the generosity of our Uncle Sam.’
’Excerpted from Chapter Two (pages 22-24)

Those who don't have their heads buried in the proverbial sand are well aware of the split state of the American economy. Increasingly, the nation has been divided into a land of ’haves' and ’have nots' where the middle class is rapidly eroding. Proof of this phenomenon is in evidence at every turn, from the profusion of real estate foreclosures, to the record number of folks filing for bankruptcy, to the skyrocketing salaries of corporate executives coming at the expense of employee benefits, to the tumbling value of the dollar, to the outsourcing of manufacturing and jobs overseas.

This disturbing trend is not the natural consequence of an honestly-operating free market, but rather the result of a rigged form of capitalism in which the government is employed to ensure that the rich get richer, and the poor poorer. David Cay Johnston, a Pulitzer Prize-winning New York Times reporter, delineates many ways in which the game has been fixed since the rise of Reagan Era in Free Lunch: How the Wealthiest Americans Enrich Themselves at Government Expense (and Stick You with the Bill).

According to the author, ’The rich and their lobbyists have taken firm control of the levers of power in Washington and the state capitals while remaking the rules in their own interests.’ That development explains why we have politicians willing to spend millions while running for offices which, theoretically, will only pay them a relatively-modest six-figure salary.

The book covers an impressive range of topics in the course of painting an overall picture of runaway greed gone hopelessly out of control, all with no restraints anywhere on the horizon. Johnston points out that the escalating situation is eerily similar to that which prevailed during the Roaring Twenties, just prior to the onset of Great Depression.

Labeling the country's current predicament as a state of tyranny, given the flagrant abuses of authority, he concludes by calling for the masses to assert their sovereignty via a mandate to reinstate legitimate checks and balances. An excellent expose’ which deserves to be read by any concerned patriot hoping to help America avoid the impending financial collapse.

Read To Be Determined’s description of Free Lunch: How the Wealthiest Americans Enrich Themselves at Government Expense (and Stick You with the Bill).