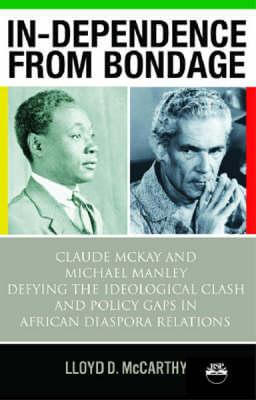 Read a Description of In-dependence from Bondage: Claude McKay and Michael Manley Defying the Ideological Clash and Policy Gaps in African Diaspora Relations

’Claude McKay (1890-1948) and Michael N. Manley (1924-1997) shared a common commitment to the struggle of African Diaspora people for liberation and justice. It is my contention that although they came from different historical periods, professional backgrounds and intellectual traditions, they arrived at a common awareness that the dominant political ideology of the North is incongruous to the history and development of people in the African Diaspora and the Global South.

McKay and Manley viewed socialism and socialist strategy as the political model for sustainable development- a form of democratic socialism that is ’organic’ to the racial and class history of people of African descent in the U.S. and Jamaica. And so, essentially, this book is about the struggles of McKay and Manley for the African Diaspora and the common idea that they believe is more appropriate for people in the African Diaspora to use in the continuation of their struggle.’
’ Excerpted from the Introduction (p.1)

Does it make sense to attempt to reconcile the lyrical lines of a celebrated poet with the political ideology of a head of state? Should such seeming apples and oranges even be discussed in the same context? As ridiculous as the idea might sound at first blush, Lloyd McCarthy has managed to pull off just such an unusual feat in In-Dependence from Bondage.

The book compares and contrasts the worldviews of a couple of late, great Jamaican thinkers, namely, the poet and novelist Claude McKay and the socialist Prime Minister Michael Manley. According to the author, both of his subjects embraced a collective Caribbean consciousness, espousing resistance by ’the millions of brutally uprooted and transplanted Africans against Western elite oppression.’

McKay, a Harlem Renaissance writer hailed as ’The Peasant Poet’ and ’The People's Poet,’ wrote from a working class as opposed to a bourgeois perspective. And Manley, likewise, was a progressive with a proletarian world view.

This trenchant treatise tackles such topical issues as globalization and the extent to which ruthless capitalists will go to exploit fellow humans. Consider the sentiment conveyed by McKay in a poem entitled ’Enslaved’ which reads in part:

’Oh when I think of my long-suffering race,
For weary centuries, despised oppressed
Enslaved and lynched, denied a human place
In the great life line of the Christian West."

Meanwhile, Manley can be seen as making similar sort of statements, as reflected in this 1974 speech advocating the escalation of the anti-apartheid movement:

’A country like Jamaica must be totally dedicated to the active support of all those measures that can lead to the overthrow of the apartheid regime in South Africa’ In other words, where wars of liberation for the purpose of establishing national freedom are being fought, the objective of freedom legitimizes them and commands our unswerving support.’

To his credit, author McCarthy points out that the pair's positions don't always overlap, since Manley was a Marxist, while McKay had been a Communist but developed an aversion to Stalin's interpretation of the philosophy. Nonetheless, this opus overall convincingly makes its case that the two shared the belief that imperialism, racism and neocolonialism were the major impediments to the progress of blacks and other non-white peoples living on the planet.