Book Review: Decoding The Dragons Mindset: Inside China S Destiny And Its Hint To The World 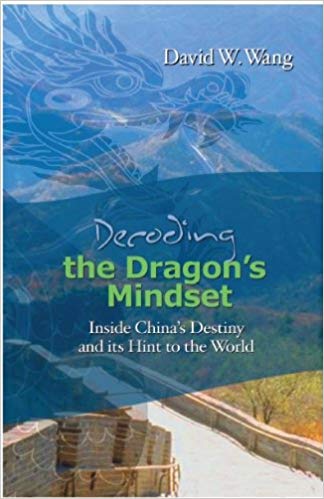 Read a Description of Decoding The Dragons Mindset: Inside China S Destiny And Its Hint To The World

’This book provides some fascinating and intriguing insights of the Chinese mindset that to most readers in the West are still something un-comprehendible and strangely foreign from the other side of the world. The 21st Century's globalization and Internet-driven information exchanges are rapidly changing our globe into a small and flat place in which we all must live in peace’

Cultural understanding and mutual appreciation of cultural heritage are the basic pillars for building a global peace. Every citizen of planet Earth must reform in thinking and attitude towards other cultures and ultimately embrace their heritage and achievements with wisdom and hope for mutual prosperity.’
’Excerpted from the Acknowledgements (page 7)

When experts analyze the reemergence of China in recent years, they tend to discuss the country's revitalization strictly in economic terms such as ’protectionism,’ ’trade imbalance,’ ’foreign investment,’ ’capital infrastructure’ and ’modernization,’ as if financial factors alone could possibly explain the phenomenon. If this were the case, then why haven't other nations been able to replicate China's success?

That's because culture has played a critical part in the renaissance, according to David W. Wang, an international business consultant based in Washington, D.C. In his groundbreaking book, Decoding the Dragon's Mindset, Mr. Wang argues that China's rich, 5,000 year-old civilization is what has made the difference, and that those Westerners who rationalize the rise as a function of population size, cheap labor costs and political ideology are in dire need of a good history lesson. And that's exactly what he has to offer in this informative tome which is likely to prove priceless to those unfamiliar with Eastern ways of thinking.

At the outset, the author discusses the six polar elements of Chinese society which have been passed down for generations, namely, ’attitude and values, spirit and role models, thinking and actions.’ Wang says that this classical ’Dragon's Hexagon’ remains an ’effective link between an ancient civilization and the modern world that has birthed a brand new synergy of values and philosophies.’

Decoding the Dragon's Mindset demonstrates why it is no fluke that China has flourished over the millennia for dynasty after dynasty while so many other great civilizations have declined and disappeared entirely. Unlike their verbose European counterparts, great Asian thinkers need very few words to make a sage point, so they tend to communicate in a very concise fashion.

In general, Wang observes that ’most Chinese people, compared to Westerners, don't typically talk that much.’ Why not? ’Because the Chinese believe quietness leads to deep and consistent thoughts and wisdom.’ He adds that we now live in a stressful, electronic age of incessant ’man-made noise’ which makes ’inner silence’ all the more important.

Later, he describes the essence of the unique Chinese family system, which values collective needs and goals over individual ones. Apparently obedience to parents and respect for elders and ancestors are virtues cultivated at an early age, for without such roots children tend to grow up with no solid identity, purpose or direction

After finishing this priceless primer, don't be surprised if you feel tempted to adopt some of the basic tenets of Chinese philosophy for your own daily life. More importantly, you might even start to wonder why such an introduction to Asian History isn't a mandatory part of every public school curriculum, just like European history.

Congratulations to David W. Wang for revealing the secrets of Chinese culture in an engaging manner apt to resonate with rather than antagonize the average, materialistic American only concerned about how the rise of China is going to affect his or her stock portfolio and 401K plan.

Read Seaburn’s description of Decoding The Dragons Mindset: Inside China S Destiny And Its Hint To The World.